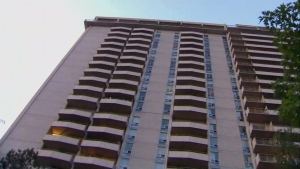 The City of Toronto may be preparing a possible legal challenge of the Ford government's new tenancy legislation but that doesn't mean it can stop the possibility of thousands of evictions in the next few months, Toronto Mayor John Tory warned Sunday.

Last week, Toronto council voted 22-2 to challenge Bill 184, which allows landlords to negotiate private repayment agreements with tenants who have fallen behind.

"I will just say they're an uphill struggle because it is clearly spelled out as an area of provincial jurisdiction, then you have to make a court application," Tory told CP24. "So we're talking about something here that is unlikely to have an immediate effect."

Under the previous law, the Landlord and Tenant Board heard all disputes over evictions and rent in arrears. The province said the bill would “modernize and streamline” disputes by allowing landlords to draw up private repayment agreements with tenants who are behind on rent.

If a tenant refuses the landlord's offer, they can still take their matter before the board, but some critics and legal analysts have said it may lead to vulnerable tenants to sign shady repayment plans.

Lawyers have noted the bill would allow landlords to evict without a hearing if a tenant fails to fulfil the repayment plan, something the Ministry of Municipal Affairs and Housing disputes.

The province previously said the changes would keep people in their homes and “at the same time, helping landlords receive payment through a mutual repayment agreement.”

“It's a better approach, especially during these difficult times,” the province said.

The changes would apply retroactively when the province first declared a state of emergency over the COVID-19 pandemic.

Tory said Sunday the new law took away "too many rights" from tenants, including the ability to have a hearing before the Landlord and Tenant Board in all circumstances before an eviction.

Councillors who supported the city's effort to challenge the bill said there are as many as 6,000 eviction orders ready to be carried out now the ban on evictions has ended.

"We cannot have thousands or hundreds of people put out of their homes at this stage of the game," Tory said Sunday.

He said that while the challenge may ultimately be unsuccessful, it may nudge the provincial government into making a change.

"It may prod the government to have another look at a piece of legislation they just passed, and see if they can provide some further protection for tenants."

-- With files from CP24's Bryann Aguilar