Spavor, Kovrig return to Canada after imprisonment in China

Five city councillors are calling on the mayor not to use “extreme show of force” when the city dismantles homeless encampments, after violent scuffles broke out between protesters and police earlier this week.

The letter, signed by councillors Shelley Carroll, Mike Layton, Josh Matlow, Gordon Perks and Kristyn Wong-Tam, asks the mayor to adopt a nonviolent approach to clearing out encampments across the city.

The councillors penned the letter in anticipation of an encampment at Moss Park being dismantled in the coming days.

The letter also comes days after the city dismantled encampments at Alexandra Park and Lamport stadium this week, resulting in violent brawls between protesters and police at the latter.

“There is absolutely no need for batons, pepper spray or even guns, not when the work should be done by the City’s Streets to Home staff and other outreach workers,” the letter read. 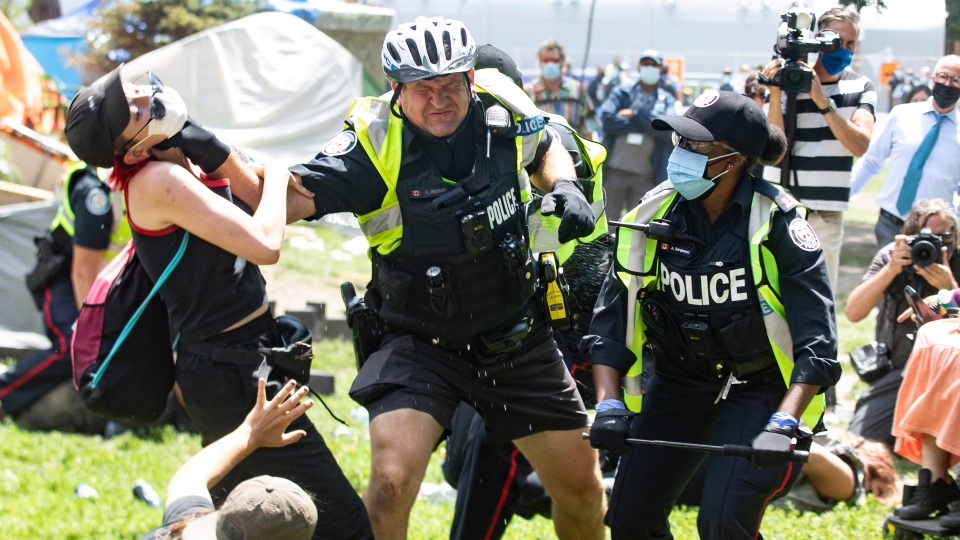 On Wednesday morning, crowds of protesters attended Lamport Stadium after word spread that the city was dismantling an encampment there.

The city said it was enforcing trespass notices that were issued on June 12 requiring encampment residents to vacate the parkette.

After hours of peaceful protest against the removal of the encampments, the city asked the police to enforce the notices and clear out the area.

Clashes then ensued between the protesters and police with what many described as extreme force being used to remove and handcuff protesters.

CP24 cameras also caught officers shoving a number of people out of the area. 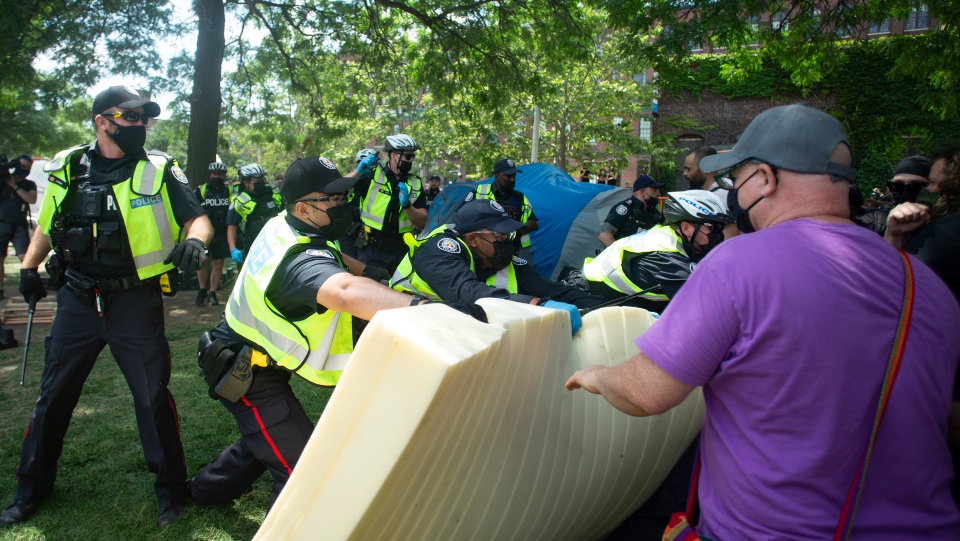 Twenty-six people were arrested at Lamport Stadium. Seven of them are facing criminal charges while the rest were charged under the Trespass to Property Act.

Police said three officers were injured and that objects were thrown and an unknown substance was sprayed at officers during the scuffles.

Tory has defended the city’s actions to clear out the encampments and reiterated that they’re not a safe housing option. He also maintains that the city does not direct the police on how to enforce trespass notices.

“We’ll continue with that work and hopefully people who have particular views, which I welcome on the issue of homelessness and how encampments should be dealt with, decide to become allies as opposed to people who seek confrontation. Because I’m just trying to address a very difficult, very complex problem involving very vulnerable people as best we can,” Tory told reporters on Friday. 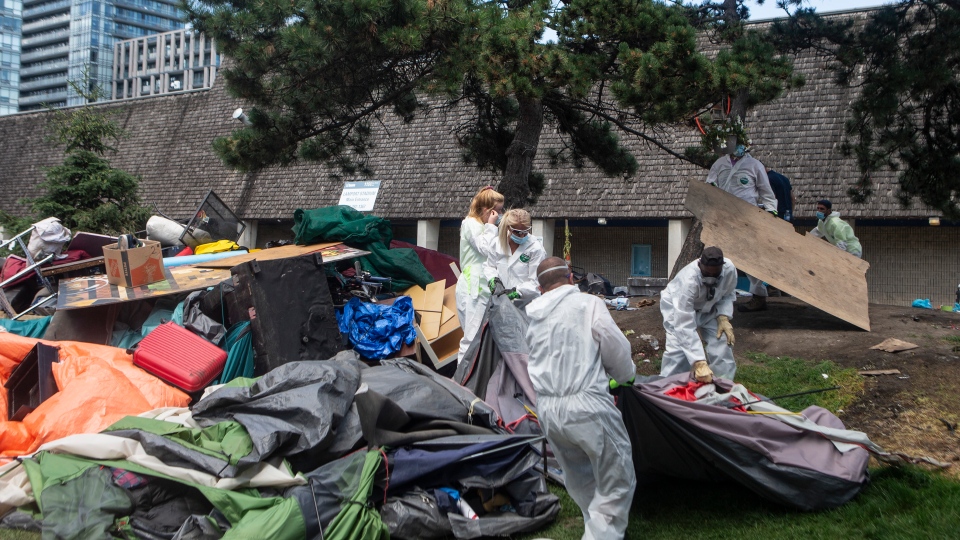 The councillors are calling for a human rights approach in engaging with individuals experiencing homelessness, as outlined in the Path Forward recommendations that were endorsed by over 200 organizations.

“Mayor Tory, your approach to encampments does not effectively resolve the challenge we face, as you are only moving people experiencing homelessness from the parks to laneways, under bridges or into another park. Absolutely no one voted for this extreme show of force that keeps happening under your authority,” the letter read.

"If the goal is simply to clear a park, then they did that. If the goal is actually to address homelessness, then it has failed miserably," he said.

Matlow noted that many encampment occupants don't feel safe in the city's shelter system. That's why, he said, they'll just move to another park, laneway, under a bridge or a ravine after being kicked out.

Instead of engaging with the organizations who put forward recommendations on how to fix the shelter system, Matlow said the mayor has been 'dismissive' of their efforts.

"The mayor continues to say that everything has been tried. Evidently, it has not been tried. The mayor keeps saying that's that this has been a compassionate approach to clearing the encampments. The videos and photos speak for themselves," the councillor said.

Matlow is urging Tory to come around and work with the people on the ground.

"There are people who work with these people experiencing homelessness every day, every day of their lives, who are saying to us, we need your help to address some of the safety issues in the shelter system before we can actually encourage people to go into these so-called safe indoor spaces," he said.

"We forget that these are people we need to deal with, not just problems we need to hide. And, you know, the approach that my colleagues and I are asking for is -- we're not questioning whether or not it's reasonable for tents to remain in our parks forever. We don't believe that either. We are saying don't go in there and start breaking people's arms and intimidating people with horses and batons and do things violently."

In a statement, the mayor's office said that comments on encampments made by "some councillors" ignore the work of city staff to ensure that city shelters are safe as possible.

"These same councillors ignore the fact the majority of the items raised in the 'Path Forward' letter are things that the City's Shelter, Support and Housing is already doing including expanding processes to engage people with lived experience and shelter users on service improvements and developing guidance materials on bed checks, food and nutrition," the statement read.

"After thousands and thousands of visits offering housing before and after trespass notices are issued, there does come a time when an encampment cannot continue to occupy a public park, to threaten the safety and health of people experiencing homelessness, and impact the families and communities who rely on these parks."

The city has said that it does not clear out encampments until it is able to offer residents temporary and/or permanent housing.

Since July 2020, the city said it has engaged more than 20,000 times with people living outdoors and asked them to seek shelter at city-run facilities.

However, many individuals experiencing homelessness have cited various reasons for not going to a shelter including lack of space, risk of abuse or rape, and risk of contracting COVID-19.