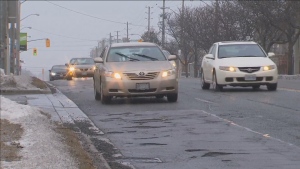 City crews are repairing thousands of potholes across Toronto today.

The city says it is taking advantage of today’s warm, dry weather to repair thousands of the city’s “pesky potholes.”

Speaking at a news conference on Saturday morning, Mark Mills, the City of Toronto’s road operations manager, said crews expect to fill at least two to three thousand today during the city’s second “pothole blitz” of 2020.

“For people out travelling on our roads or cyclists in cycling lanes, please expect some minor delays. Our crews are there to help. If you come across those crews, please give us the time and space to do our jobs,” Mills said.

“By Monday morning’s commute, you will see a considerable difference in the driveability of our roadways.”

Mills said 50 crews made up of about 110 employees will be out filling potholes on streets across the city today, including the Gardiner Expressway and the Don Valley Parkway.

“With these falling temperatures that we have overnight where we see temperatures of -20 C, and temperatures today in the 8 C range, that is the perfect recipe for potholes. That’s why we are out here in the fair weather to try to get a good number of potholes filled,” he added.

Mills said at this time last year, there were likely more pot holes on city streets than there are this year.

“I think last year we may have seen more freeze-thaw events. We did definitely see more snow, which contributes to the pot holes,” he said.

“What happens is when we get the freeze-thaw events that moisture, that precipitation, gets into the first layer of asphalt and freezes. It actually lifts the asphalt up a little bit and when it thaws, we have traffic coming over that void, it breaks up the asphalt and we have the beginning of a pothole.”

During the last blitz about three weeks ago, Mills said crews were able to fill around 7,000 potholes.

“Our staff really stepped up,” Mills said. “We will do the best we can today and fill as many as we can.”

The city fills approximately 200,000 pot holes annually and budgets between about four and five million dollars a year to the cause.

City crews are repairing thousands of potholes across Toronto today.