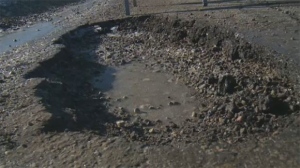 City crews will be hitting the streets Saturday to carry out a “pothole blitz” to repair Toronto’s winter-worn roads.

The planned blitz comes amid an expected reprieve from frigid, mid-winter temperatures. A high of 4 C is expected in the city Saturday, with mainly sunny skies. Sunday is expected to be even warmer, with a high of 6 C.

The blitz will include expressways, major roads and neighbourhood streets.

While roughly 25 crews are out repairing potholes on a regular day, the blitz will see as many as 50 crews out.

“Some crews will begin on the Gardiner Expressway and Don Valley Parkway starting at approximately 5 a.m. Saturday morning to take advantage of lower traffic volumes. Others will be on all city streets as early as 6 a.m.,” the city said in a news release.

Minor delays are anticipated for motorists and cyclists.

“The public is asked to be safe by respecting work zones and giving crews space while they make repairs,” the release said.

According to city data, crews fix some 200,000 potholes per year. A recent series of freeze-thaw cycles has left a fresh crop pock-marked across roadways.

The city says it has already repaired more than 29,000 potholes so far this year.