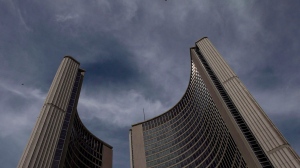 A union representing the city’s inside workers has requested a no-board report from the Ministry of Labour, potentially paving the way for a work stoppage that could begin on or around March 18.

CUPE Local 79, which represents about 22,000 city workers, made the request on Friday.

Once the report is issued it will trigger a 17-day countdown, at which point both parties will be in a legal strike or lockout position.

In a news release, CUPE Local 70 said that it anticipates that the strike or lockout date will be “around March 18” depending on how many days it takes to issue the report.

“The city has been quite open about their attempts to seek significant concessions, erode job security and set the stage for further privatization and contracting out of the services Torontonians rely on,” CUPE Local 79 President Dave Mitchell said in the release. “They have also not shown any movement on improving the working conditions of our part-time and recreation members, most of whom have limited access to benefits and no predictable schedules.”

Earlier this month the city requested a no-board report in its talks with its outside workers union, CUPE Local 416, and as a result both sides will be in a legal strike or lockout position on Feb. 27

In the release, Mitchell said that while the city appears to be “pushing toward a labour dispute” in its talks with its outside workers union, its negotiators “just dropped their concessions down and left” in talks with CUPE Local 79.

The chair of the city’s bargaining committee, however, objected to that characterization in a statement issued late Friday afternoon.

“The bargaining teams for the City of Toronto and CUPE Local 79, the union representing city inside workers, have been in collective bargaining since the beginning of December. In this time we have met with CUPE Local 79 on a number of occasions and discussed a wide range of issues,” Deputy Mayor Denzil Minnan-Wong said. “As is the norm in the course of bargaining, earlier this month CUPE Local 79 requested that the province appoint a conciliation officer and today after one meeting with the conciliator, the union requested a no board report.”

In their statement CUPE Local 79 said that one of the main issues of contention at the table has been the city’s refusal to extend the expiry date on a “modest job security” provision for members with 15 years of service.

For his part Minnan-Wong said that provision essentially means “jobs for life” and is something that the city has worked to address over the last two collective agreements.

“The city has been crystal clear with both CUPE locals, in this round of bargaining. The city is not seeking to make any changes in regards to this provision and that the date that CUPE bargained was not a ‘rolling date’ – it is a firm date,” he said.

News of the no-board report requested by CUPE Local 79 comes one day after the city held a new conference to unveil its contingency plans in the event of a work stoppage involving CUPE Local 416 that woulkd see waste collection suspended east of Yonge Street and recreation centres shuttered.

Both CUPE Local 79 and CUPE Local 416 have been without a contract since Dec. 31.