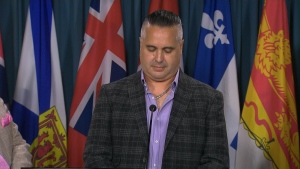 Christopher Hudspeth speaks at a press conference announcing a class-action lawsuit against a man who distributed anti-gay literature at Toronto's pride parade.

The owner of a bar in the city’s gay village and former Deputy Premier George Smitherman have launched a class action lawsuit against a group of anti-gay activists who distributed hateful literature during Toronto’s annual pride parade earlier this summer.

Cambridge LLP has filed the class action lawsuit on behalf of Christopher Hudspeth and George Smitherman.

The lawsuit seeks $104 million in damages from William Whatcott and those who supported him in sneaking into the pride parade and handing out anti-gay literature that it alleges amounted to “hate speech.”

“As a long time gay activist I am outraged that a notorious homophobe infiltrated our pride parade in order to spread his lies and distribute his pamphlets,” Hudspeth, who owns Pegasus on Church, told reporters at a news conference in Ottawa. “Pride needs to be a safe place for everyone. We put up with enough homophobic messaging every day. We deserve a homophobic free zone at our pride parade.”

Whatcott has said that he used an alias to register the Gay Zombies Cannabis Consumer’s Association as a participating group at pride.

Whatcott and a group of unknown associates then dressed in green bodysuits and handed out anti-gay literature disguised as condoms along the parade route.

The purpose of the lawsuit, he said, is to put an end to him spreading his “hateful and disgusting message” at pride parades once and for all.

“There is no doubt in my mind that some fundamentalist group is backing these activities. We need to smoke them out,” he said.

According to the lawyer handling the case, the suit seeks an injunction that would prevent Whatcott and his co-conspirators from “further distribution of hate speech and from attempting to participate in any future pride parades anywhere in Canada.”

Christopher Hudspeth speaks at a press conference announcing a class-action lawsuit against a man who distributed anti-gay literature at Toronto's pride parade.