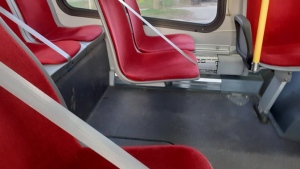 Cleaning has become the leading cause of TTC bus delays during the COVID-19 pandemic but the transit agency insists that its decision to frequently disinfect its vehicles is not contributing to overcrowding.

The data, which was first reported by the Toronto Star, raises the question of whether the TTC should be frequently pulling buses from service to disinfect them, given the extremely low risk of contracting COVID-19 via surfaces.

But in an interview with CP24 on Wednesday morning TTC spokesperson Stuart Green said that the data only provides information about specific vehicles and in most cases the TTC is replacing buses that are pulled from their routes to undergo cleaning with floating buses that are classified as “run-as-directed” vehicles.

He said that those buses aren’t likely to show up on the TTC’s various apps but should otherwise help ensure “that the customer experience is the same.”

“We are not taking buses out of service and causing crowding or making routes busier, we're taking buses out of service because the advice is that cleaning them regularly helps control the spread of COVID-19 and that's what we're interested in doing,” he said. “It is very much a balancing act but safety is of course paramount to all of this. So as I say if we see a route that's getting busier we'll put extra service out there and we most certainly would not take a bus out of service if it's going to cause routes to get busy or to cause crowding.”

The TTC began an enhanced cleaning program of its vehicles in January 2020 and has committed to disinfecting buses, streetcars and subway cars multiple times a day with a focus on high touch surfaces, like railings and straps.

However, most epidemiologists now agree that the risk of contracting COVID-19 via surfaces is low and that close contact with other individuals or infection via aerosol spread in poorly ventilated spaces are the primary contributors to the spread of the virus.

Speaking with CP24, Green said that the TTC may consider curtailing its cleaning efforts but only if its recommended to do so by public health experts.

In the interim, he said that the TTC is constantly monitoring crowding levels on its vehicles and will make sure that the frequent cleaning of vehicles does not exacerbate the problem.

“We have all been learning along the way, the science has changed along the way and now the evidence of surface-based transmission isn't as strong as it may have been at the beginning (of the pandemic), so we'll certainly look at that (cutting back the cleanings),” he said, noting that a staff report with the latest advice from Toronto Public Health will be going to the TTC’s board in September.

The TTC has estimated the cost of increased cleaning of vehicles at $25.8 million in 2022.