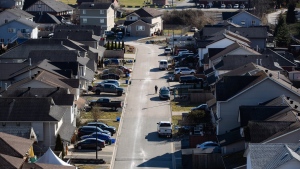 The federal housing agency says that mortgage debt grew by nine per cent for the year, and topped 10 per cent in the early months of this year before rising interest rates started to slow the market.

"The levels of investments of households are quite high. So it is a source of vulnerability," said Tania Bourassa-Ochoa, a senior economist at CMHC and co-author of the report on mortgage trends.

Banks saw a 43 per cent increase in new mortgage originations and an increase of 22 per cent for refinances compared with 2020, leading to an additional $400 billion in residential mortgages on their balance sheets, while credit unions added $54 billion.

Activity in the housing market has however slowed considerably in recent months as central banks raise interest rates to slow inflation. On Wednesday the Toronto Regional Real Estate Board said sales were down 41 per cent in June compared with last year, while on Tuesday Real Estate Board of Greater Vancouver said regional home sales were down 35 per cent in the month.

CMHC says that variable rate mortgages were increasingly favoured last year as the discount on interest rates increased, with the mortgage type growing to 53 per cent in the second half of the year, from 34 per cent of total mortgages in the first half.

The increase of variable rate mortgages means more people are exposed to rising interest rates, though the majority of such mortgages have fixed payments so increases would most be felt at renewal.

"Canadians that took on a new mortgage with variable interest rates will be the ones that will be feeling that increase the most, and most rapidly," said Bourassa-Ochoa.

Data from last year showed that there was little indication of any problems with people making mortgage payments, as high savings rates and the buoyant housing marker helped push down mortgages in arrears, which fell across all lender types.

In looking at inequality in the housing market, the report noted that Indigenous, Black, Arab and Latin American populations had significantly lower homeownership rates than the national average as of the 2016 census, the latest data available as the authors wrote the report.

Homeownership rates were a little under 50 per cent for the groups, while the overall rate for Canada was 74 per cent and slightly higher for white and Chinese populations.

The report noted that after controlling for demographics, metropolitan area and income, Indigenous, Black, Latin American, Arab and Filipino Canadians have lower average property values than other Canadians, a gap that has increased since the 2006 census. It said that since housing wealth is a strong indicator of economic success of future generations, any large deviations between population groups are an indication that inequalities will persist.