Compared to U.S., Canada no saint either on Indigenous rights, racism: experts 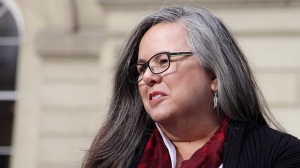 Lynn Gehl is seen outside Ontario's Court of Appeal in Toronto on Tuesday, Dec. 20, 2016. THE CANADIAN PRESS/Colin Perkel.

WASHINGTON -- As one of America's most familiar sports franchises finally confronts its controversial identity, experts warn against assuming Canada is farther along than the United States in combating racist attitudes towards Indigenous Peoples.

The decision comes with the United States at the centre of a global reckoning with long-standing systemic and institutional racism against Black people and other racialized communities.

Lynn Gehl, an Indigenous author and scholar in Peterborough, Ont., says Canadians should resist the belief that their country is any further along than the U.S. in acknowledging and protecting First Nations, Inuit and Metis communities.

Gehl notes that both the Truth and Reconciliation Commission and a public inquiry into missing and murdered Indigenous women and girls concluded that Canada has been engaged in acts of genocide.

The CFL's Edmonton Eskimos are under pressure to change a nickname long considered a derogatory, colonial-era term, while in Morden, Man., a minor-league hockey team faces similar demands to drop the same moniker just abandoned in Washington.

This report by The Canadian Press was first published July 16, 2020.