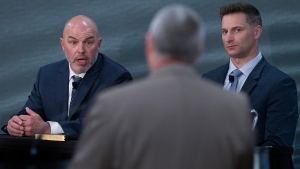 HALIFAX -- When a man disguised as a Mountie started killing people in northern Nova Scotia two years ago, there was considerable confusion over who was in charge of the RCMP operation, newly released documents show.

The public inquiry investigating the tragedy has also heard, in testimony on Monday, about the “chaos in communications” that ensued on April 18-19, 2020, when 22 people were killed in the worst mass shooting in modern Canadian history.

In a summary of evidence about the RCMP's command decisions, released Tuesday, the inquiry was reminded that the first indication of trouble came at 10:01 p.m., on April 18, 2020. That's when Jamie Blair, a resident of rural Portapique, N.S., called 911 to report that her husband had just been shot by a man with “a big gun.”

As the gunman broke into her home, Blair reported just before she was shot dead that the attacker had a “decked and labelled” police car but was not a police officer.

At the time, Staff Sgt. Brian Rehill was the RCMP's risk manager at its Operational Communications Centre in nearby Truro, N.S. Following RCMP protocol, he immediately assumed command.

Within the next 30 minutes, as reports came in about more fatal shootings, Rehill engaged the RCMP's critical incident command structure and he reached out for help from four other staff sergeants: Steve Halliday, Addie MacCallum, Al Carroll and Jeff West.

The 130-page document includes excerpts of an interview with Halliday, who made it clear that he believed he was in charge of the “overall operation” when he arrived at the RCMP detachment in Bible Hill, N.S., at about 11:30 p.m.

But Halliday, the district's operations officer, told an inquiry investigator that he decided to leave Rehill in control of resources as “ad hoc incident commander.”

As well, there was another RCMP officer providing direction that night: Sgt. Andy O'Brien, the Bible Hill detachment's operations non-commissioned officer. Though he was off duty and had consumed four alcoholic drinks, O'Brien later retrieved his portable radio from the detachment - with the help of his wife - and joined in offering direction to investigating officers.

The question of who was in charge in those crucial early hours was addressed in an earlier occupational health and safety report, which found the RCMP had breached the federal Labour Code by failing to ensure employees had necessary supervision.

In a March 29 report, investigator Lorna MacMillan said general duty officers were operating in an “environment of confusion as to who had command and control of the situation.”

MacMillan concluded the supervisors' training “did not provide the competencies required to allow supervisors to manage an unfolding critical incident such as an active shooter in a large outdoor, rural â€¦ environment.”

Testifying before the inquiry on Tuesday, Halliday said he didn't see confusion in leadership during the early response.

As he drove towards Truro from the RCMP offices in Stellarton, Halliday said he didn't hear excessive radio traffic as O'Brien and Rehill spoke to the first three officers advancing into Portapique, though he added he wasn't listening constantly.

Halliday testified that when he arrived at the RCMP offices in Bible Hill, MacCallum was busy looking at maps of the area, and Carroll was tasked with strategies to contain the area. He said it made sense to keep Rehill as the main voice on the radio to the front-line officers because at that point he had “the best situational awareness of anyone.”

Halliday said he was aware that O'Brien was also speaking on the radio, though he didn't know he was working from home.

“Frankly at that point I was glad to have O'Brien supporting Rehill .... Everybody had a role, everybody had a function and knew what that role was. In my view there was no mistake in that. In my view they were carrying their functions out well and doing what needed to be done to address the issue,” he said.

Tim Mills, the RCMP corporal in charge of the tactical response unit at the time, testified Monday that he and his 12-member team received limited direction as they attempted to find the killer on the second day.

Roger Burrill, senior counsel for the inquiry, asked Mills: “As you're responding, and the perpetrator is on the move, is anyone directing your response locations?”

“No, no,” responded Mills, who has since retired from the force.

As for the more senior Mounties involved, the latest document mentions Supt. Darren Campbell and Chief Supt. Chris Leather. But few details are provided, aside from confirmation that Campbell had approved deploying a critical incident commander at 10:46 p.m. and followed up with an email indicating there had been a “multiple shooting.” The document says it remains unclear who received the email.

At 11:08 p.m., Leather sent a text to Campbell indicating he was aware of a “double homicide and an active shooter north of Truro.” Campbell responded by confirming he had approved a critical incident commander but had no further details to offer.

At 1:19 a.m. on April 19, 2020, Staff Sgt. Jeff West took over as the critical incident commander at a command post in Great Village, N.S., about 10 kilometres east of Portapique. But due to heavy traffic on the RCMP radios, he was unable to announce the change until five minutes later.

The inquiry has heard that police communication via two-way radio was a mess during most of the initial response, mainly because the system couldn't handle the number of calls coming in. RCMP Cpl. Trent Milton, an emergency response team member who testified on Monday, said there was “chaos in communications.”

Under questioning by Robert Pineo, a lawyer who represents the families of 14 victims, the RCMP officer said, “Too many people were trying to chime in over the radio, and it was leading to confusion.”

And when Staff Sgt. Dan MacGillivray took over as critical incident commander at 10:20 a.m. on April 19, 2020, he was unable to broadcast the change of command until 11:21 a.m., again because of the clogged airwaves.

The inquiry has heard the gunman, 51-year-old denture technician Gabriel Wortman, was shot dead by two Mounties just before 11:30 a.m. when he stopped at a gas station north of Halifax to refuel a stolen car.