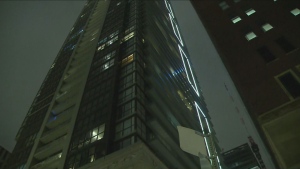 Police say they are investigating after food and water bottles were reportedly tossed from a condo building near Richmond and Bay streets.

Items, including food and water bottles, were reportedly thrown from a Financial District condo building on Monday night, the second such incident in the downtown core over the past two days, Toronto police say.

Officers were called to a condo on Temperance Street, in the area of Richmond and Bay streets, at around 8:40 p.m. for reports that someone was throwing items from a building in the area.

Police say it appears food and water bottles were tossed from a very high floor and a car windshield was damaged.

No injuries were reported and police say they have not been able to locate the unit in the 60-floor building where the items were thrown.

The incident comes just one day after bottles were hurled from the balcony of a unit on the 35th floor of a condo building in the area of York Street and Lake Shore Boulevard on Sunday afternoon.

Police say the bottles were thrown by people attending a party at a short-term rental unit in the building.

Four people were arrested and charged with a number of offences, including assaulting a peace officer with a weapon.

Seven people were also charged with failing to comply with the emergency orders under the Reopening Ontario Act.

Police say they are investigating after food and water bottles were reportedly tossed from a condo building near Richmond and Bay streets.