Cost of terminating City of Hamilton employees over vaccine status could near $7.4 million, staff warn 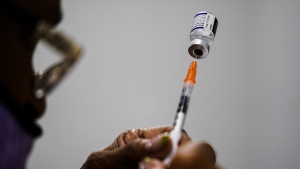 FILE - A syringe is prepared with the Pfizer COVID-19 vaccine at a vaccination clinic at the Keystone First Wellness Center in Chester, Pa., Dec. 15, 2021. (AP Photo/Matt Rourke, File)

The cost of terminating hundreds of unvaccinated City of Hamilton employees could end up surpassing $7 million should an arbitrator determine that they are entitled to severance payments, a staff report suggests.

Hamilton city council voted in April to move forward with plans to terminate employees who fail to comply with a mandatory COVID-19 vaccination policy, despite a staff recommendation that the policy be suspended, except for new hires.

The terminations were initially scheduled to take effect on May 31, however council ultimately voted to extend the deadline until Oct. 1.

One of the city’s largest unions, CUPE Local 5167, has since filed a grievance of the policy, in which they argue that language in the collective agreement stipulates that employees who fail to comply with mandatory vaccination polices be placed on unpaid leaves, not terminated.

In a report that was considered by Hamilton’s general issues committee last week, staff suggested that the distinction, if upheld by an arbitrator, would likely mean that those employees would end up being terminated without causes nine to 12 months down the road.

Staff say that the cost of doing that is pegged at between $2.8 and $7.4 million.

“This group of employees would, in the event that just cause and wilful misconduct are not found to have occurred, at a minimum, be entitled to termination and severance payments arising from the operation of the Employment Standards Act (ESA),” the report notes. “This group would have an increased likelihood of receiving ESA amounts, owing to the likelihood that these employees will, ultimately, not be terminated for failing to follow the policy, but as a result of being placed upon an unpaid leave for an extended period of time, resulting in the eventual frustration of the employment relationship.”

There are currently 234 Hamilton employees who are not complaint with the vaccination policy, including 130 who are represented by CUPE Local 5167.

Staff say in the report that if an arbitrator rules in the city’s favour terminations would remain a “viable option” when the Oct. 1 deadline arrives.

However, in a news release issued this week a union representing public transit workers slammed the city for being willing to “saddle the next council and Hamilton taxpayers with up to $7 million in liability damages.”

“The decision makes no sense at this time,” Amalgamated Transit Union (ATU) Local 107 Vice President Rob Doucette said. “Long-time loyal employees now facing termination if not vaccinated have been working on the front lines, serving the public, through the worst of the pandemic. It took us more than one and a half years just to get basic PPE yet we kept the service going.”

According to the staff report, Hamilton has already spent more than $93,000 on legal fees related to the mandatory vaccination policy.

The arbitrator is expected to rule on the matter in late September.