COVID-19 vaccine booking opens to anyone 40+ in Ontario 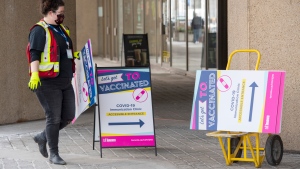 A worker sets up signs for a mass vaccination clinic in Toronto on Wednesday, March 17, 2021. THE CANADIAN PRESS/Frank Gunn

Residents 40 and over in Toronto and across Ontario are now eligible to schedule a COVID-19 vaccine appointment through the provincial booking system as the province plows ahead in its vaccination campaign.

As of 8 a.m. this morning, anyone turning 40 this year can book a shot through the provincial system.

The move comes as the province receives more vaccine doses than ever through larger shipments from Pfizer and Moderna.

While many 40+ residents around the GTA have been eligible to book appointments already through their public health units, Toronto is using the provincial booking system, which means that it must wait until the province lowers the age limit.

The City of Toronto said it is adding 5,000 new appointments at city-operated immunization clinics between May 17 and May 23 in anticipation of the increased demand Thursday.

While many city run clinics are booked to or near capacity for the next few weeks, the city said that as of Wednesday, 20,000 appointments were still available for the week of June 7.

Several other groups became eligible to book a shot this week, including those with “at-risk” health conditions and anyone unable to work from home, as listed in Group 2 of the Ontario vaccination plan.

Provincial officials have said that they are aiming to open vaccine bookings to all eligible adults by May 24.

City officials said Wednesday that the “Team Toronto Sprint Strategy,” which aims to pump extra vaccine supply into priority communities, appears to be paying off.

Vaccination coverage in the 17 hot spot postal codes targeted by the strategy so far has grown steadily, surpassing a vaccination rate of 50 per cent of adults in many areas.

The city said it is adding five more postal codes to the plan from among some of the hardest hit areas in Toronto.

“This will ensure more than 100,000 vaccine doses will be available for mobile and pop-up clinics in 22 of our hottest hot spot postal codes,” Mayor John Tory said. “We are seeing double-digit percentage increases in vaccination rates in the areas where we have focused.”

While the sprint strategy brings additional vaccines to the hardest hit parts of the city through mobile clinics and pop-ups, residents 18 and older in all 53 Toronto hot spots are eligible to book a vaccination appointment through city-operated immunization clinics.

Ontario has been pumping 50 per cent of its vaccine supply into hot spot areas in a two-week push that is set to come to an end this week. However some experts have called on the province to extend the strategy.

Anyone looking to book a shot in Toronto can check the city’s website to make sure that they are eligible and to see where they can book.