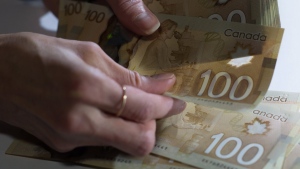 The Desjardins study released Wednesday said the coming months could be bumpy for household budgets as cracks begin to show in the pandemic recovery.

With the value of many assets at risk and liabilities increasing for Canadian households, the outlook for wealth looks bleak, the study said.

"By the end of this unusual economic and financial cycle, the massive wealth accumulated by Canadian households will most likely have shrunk, at least in real terms," the study said.

Yet the extent of the reduction remains uncertain and will depend on how smoothly the Bank of Canada "navigates a soft landing of the economy," Desjardins said.

Meanwhile, the phaseout of government aid programs could hurt some household budgets while the savings rate is expected to gradually trend lower as costs rise, the study said.

Canadians with lower incomes and greater liabilities will feel the pain before others, with high debt levels and rising interest rates expected to increase consumer insolvency, according to the study.

Still, the research shows Canadians are flush with jobs and wages remain robust.

"Fortunately, income growth is expected to remain healthy even as inflation decelerates," the study said.

Higher wages and a return to more normal levels of inflation will help curb loan delinquencies and consumer insolvency, according to the research.

Meanwhile, consumer spending and consumption growth is expected to slow in the coming months after a strong start to 2022.

The slowdown is due to both a levelling off of spending on services after the economy reopened as well as the affect of higher prices on the consumption of goods.

In addition, debt servicing costs — which declined during the pandemic — is expected to gradually climb as interest rates rise, the study said.