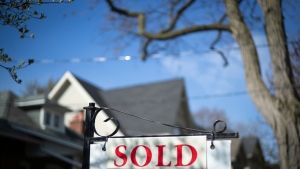 OTTAWA -- The Canadian Real Estate Association says the number of homes sold in April fell 12.5 per cent compared with the all-time record high set in March.

The association says sales posted month-over-month declines in close to 85 per cent of all local markets, including virtually all of B.C. and Ontario.

However, it says sales in April were still a record for the month and up 256 per cent compared with a year ago when sales collapsed due to the pandemic.

The results came as the number of newly listed homes fell 5.4 per cent in April compared with March.

The actual national average home price was a little under $696,000 in April, up 41.9 per cent from the same month last year.