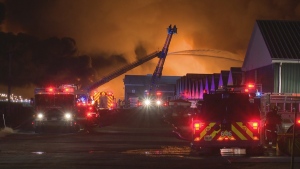 Firefighters are shown battling a blaze at a greenhouse complex in St. Catharines.

Officials say that firefighters are still dealing with small flames and hotspots following a massive blaze at a large greenhouse complex in St. Catharines Friday night.

The fire at Pioneer Flower Farms on Seventh Street Louth south of Third Avenue Louth began at around 11 p.m. and continued to burn throughout the night.

St. Catharines Fire told CP24 Saturday morning that they were receiving assistance from five neighbouring fire departments. Reports from the scene suggested that the fire had engulfed several greenhouses and structures.

“This would be the most significant fire that I’ve had in my 33 year career,” said St. Catharines’ Fire Chief Jeff McCormick. “The size of the greenhouse, the number of buildings that were consumed in the fire. We had fire spread into the bushes behind the property. It was a significant size fire.”

“In essence, we were fighting the fire from one side of the building while the fire was burning significantly beyond the reach of our aerial devices that were putting water on the fire.”

As of 2:30 p.m., officials said the fire had been contained, but firefighters were still battling small hotspots in the building.

Police said that there is some concern due to blowing smoke. For that reason, residents in several areas northwest of the fire have been told to shelter in place, including those on Seventh Street Louth, Gregory Road, Second Avenue Louth, Third Avenue Louth, Glass Ave and 11th Street.

Investigators said that migrant workers were on the property at the tie of the fire, but no injuries have been reported.

The total damage from the fire remains unclear, though it is expected to be in the millions of dollars.

St. Catharines Fire says that they have no information as of yet on whether the blaze could be suspicious.