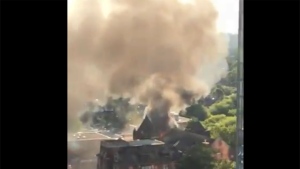 Smoke billows from a fire in the area of Vaughan Road and St. Clair Avenue West Tuesday August 11, 2020. (@LStocks93 /Twitter)

No injuries were reported after crews responded to a two-alarm house fire in the Humewood area Tuesday evening.

Firefighters were called to a semi-detached home on Vaughan Road between St. Clair Avenue West and Louise Avenue shortly before 7 PM.

Images from the scene showed thick heavy smoke billowing from the area.

Toronto Fire said crews arrived to find the roof of the home at 80 Vaughan Road engulfed in flames and began fighting it from the outside.

Most of the fire had been knocked down by around 7:15 p.m. but crews remain at the scene.

Local road closures are in effect as crews stamp out hot spots.

It is not yet clear how the fire started. Toronto Fire said the home appears to have been abandoned.

Smoke billows from a fire in the area of Vaughan Road and St. Clair Avenue West Tuesday August 11, 2020. (@LStocks93 /Twitter)