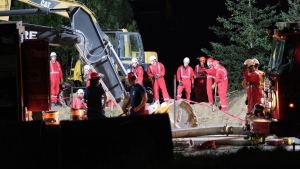 Rescue workers are pictured at the scene of a trench collapse in Ajax Monday August 8, 2022. (Simon Sheehan /CP24)

Rescue crews recovered the bodies of two men killed when the trench they were digging suddenly caved in on Monday, police said.

An Ornge air ambulance attended the scene and transported one person to hospital.

A second worker broke his ankle and was taken to a local hospital.

A large number of firefighters and heavy excavating equipment was brought to the scene, with crews slowly digging and reinforcing the edge of the trench through the night.

By about 2:30 a.m. Tuesday, Durham Regional Police said they found the bodies of the two missing workers.

They were carefully pulled out of the trench.

An Ontario Ministry of Labour investigation into what caused the collapse is ongoing.

Rescue workers are pictured at the scene of a trench collapse in Ajax Monday August 8, 2022. (Simon Sheehan /CP24)