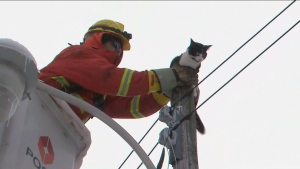 Crews rescued a cat from a Toronto hydro pole on Thursday morning.

A small cat found trapped on top of a hydro pole following a winter storm in the city’s west end was rescued by Toronto Hydro Thursday morning.

Chris Ball, who lives near Dufferin and Bloor streets, first posted a photograph of the cat to social media a little after 8 a.m.

His partner Kristine said that she first noticed the animal when she looked out her window just before leaving for work.

They both contacted 311, Toronto Fire and Toronto Animal Services in hopes that someone would help

“We came back around to the alleyway and as soon as we came over she started crying and meowing at us,” Kristine Ball said. “She is somebody’s cat and she is scared.”

The couple put food out in an effort to coax the cat down, but the animal would not move.

Animal Services sent an officer to the scene to assess the situation, but said that ultimately “animals normally come down from trees or poles on their own.”

“We usually advise residents to contact Toronto Animal Services, if an animal is observed up on a tree or pole for more than 72 hours,” Animal Services said in a statement. “However, due to inclement weather today, an officer has gone out to assess the situation.”

The cat was found on the heels of a February winter storm that struck the Greater Toronto Area. Heavy snow fell across southern Ontario on Wednesday and between 15 and 25 cm was expected in the city. On Thursday, winds gusting between 50 and 70 kilometers an hour started blowing the snow that fell the night before.

A few hours after the cat was found, Toronto Hydro arrived at the scene with a truck. An officer went up with a ladder and was able to grab the cat, bringing it back down to safety.

“We are super relieved. We are just glad it is safe,” Chris Ball said.

“A purr-fect ending to this story,” the mayor said.

Following the ordeal, Toronto Animal Services took to Twitter in hopes of locating the owners of the aptly named 'Hydro Cat'.

"Toronto pet parents: if you’re missing your adventurous cat, we’ve got him - he’s safe, warm and eating our treats. We hear you’re all calling him #HyrdroCat and that name was trending. Good enough for us," the agency said in a tweet.

Animal Services said that 'Hydro Cat' is about a year old and is not neutered nor microchipped. The agency said that he is in "good condition", but rather thin and understandably nervous.

"If no one claims him, adoption may be an outcome we seek for him," the agency added.

Crews rescued a cat from a Toronto hydro pole on Thursday morning.