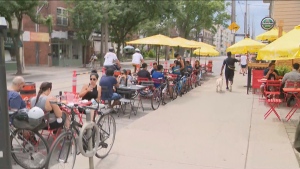 City crews will begin installing curb lane and sidewalk patios for the popular CafeTO program this weekend, even though provincial restrictions continue to prohibit outdoor dining.

Toronto’s General Manager of Transportation Services Barbara Gray tells CP24 that more than 1,200 bars and restaurants have already signed up to participate in the program and more could join them once restrictions are eventually loosened.

“I think the sooner that we can get them some ability to have people dining, you know in outdoor cafes, the better it's going to be for them to try to get back to some kind of semblance of normal,” she said. “They've been under tremendous stress. You know it's not going to be the same as it would be if they had full dine in service but certainly we heard from tons of restaurants last year that it was a lifeline for them and so we're trying to make it as straightforward and easy for them to participate and get them out there and serving as soon as possible.”

The CafeTO program didn’t get going until June last year but the city had been hopeful to have the initial batch of makeshift patios up and running by the Victoria Day weekend.

While it remains unclear whether that will happen, the city is moving ahead with the installations so restaurants and bars can begin serving customers outdoors as soon as they are allowed to.

“As you know the numbers have stabilized but they have stabilized at the level of 1,000 new cases a day or just under so that is hardly cause for us to start thinking about what we can do to loosen things up at the moment,” Mayor John Tory told CP24 on Friday morning. “I think we just have to really focus on the vaccination effort, which we are, and following the public health restrictions that are in place and that will take us to the day where we can talk about reopening.”

The current stay-at-home order is set to expire on May 20 but could be extended.

On Thursday Associate Medical Officer of Health Dr. Barbara Yaffe said that while a partial reopening is possible by the end of May, the province will be proceeding with caution in the hopes that a fourth wave can be avoided.

“Of course there are active discussions around what to do in terms of what are the thresholds that should be considered for any loosening of restrictions and we don’t know yet but I would say given that the number of cases is so high still, the number of hospitalizations and ICU overload and so on, I would be surprised if things open up at the end of May," she said. “They may open partially. Certainly we don’t want to open up prematurely and end up with a fourth wave. That is the last thing we need.”