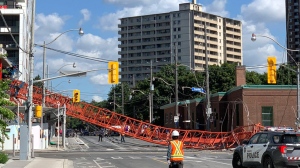 A crane has collapsed at the intersection of River and Dundas streets. (Twitter/ @cornsomething)

Crews are working to remove a crane that collapsed in a Regent Park intersection on Thursday morning.

The crane toppled in the intersection of River and Dundas streets at around 10:30 a.m. on Thursday, crushing a bicycle and narrowly missing a female cyclist along with another pedestrian.

The machinery was being used at a nearby construction site and The Daniels Corporation, the developer of the project, said mechanical failure was to blame for the incident.

“Construction at the site has been temporarily suspended and we are fully cooperating with investigators. We have also initiated our own internal investigation into the incident,” the developer said in a statement released Thursday.

Toronto Fire Platoon Chief Dan Sell said construction crews noticed bolts missing from the crane on Thursday morning and the machinery collapsed as crews were in the process of securing the area.

Police previously confirmed that there is “no criminality” involved and the Ministry of Labour is investigating.

The incident caused a number of hydro outages in the area but crews say power has now been restored to customers in the neighbourhood.

Engineers will be on scene today working to remove the crane, which is currently blocking the roadway and preventing traffic from getting through the intersection.

Officials previously indicated that the removal should be complete by Friday night.

This is the second time a crane has collapsed in the city's downtown core in the past month and Mayor John Tory told CP24 Friday that he has spoken to the province about the situation.

"They are on it and we would like to see more inspections and perhaps a review of the rules so that we can see how you would avoid a situation where there would ever be bolts missing... that could cause the instability of a huge structure like that which endangers workers and it endangers people," Tory said.

"Thank god for sort of  the keen observation of some of the workers who saw some of the bolts missing."

A crane has collapsed at the intersection of River and Dundas streets. (Twitter/ @cornsomething)