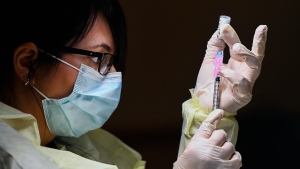 Francesca Paceri, a registered pharmacist technician carefully fills the Pfizer-BioNTech COVID-19 mRNA vaccine at a vaccine clinic during the COVID-19 pandemic in Toronto on Tuesday, December 15, 2020. THE CANADIAN PRESS/Nathan Denette

Opposition critics are slamming the Ford government over a scaled-back COVID-19 vaccination schedule over the holidays.

While the province has received around 90,000 doses of the Pfizer-BioNTech vaccine this month, only a small fraction of those doses have been administered so far.

Doses of the newly approved Moderna vaccine also began arriving in the province last week. Provincial officials had said Ontario was expected to receive about 53,000 doses of that vaccine by the end of December.

But according to the province, just 13,200 vaccine doses have been administered as of 4 p.m. Monday.

Most vaccination clinics were open with shortened hours on Dec. 24. All clinics were then closed on Dec. 25 and Dec. 26. Just five hospitals ran clinics on Sunday, while 10 were operating Monday. All 19 of them are expected to reopen on Tuesday.

In a statement to CP24.com, the Ministry of Health said the modified holiday schedule had been requested by hospitals.

“It is important to note that COVID-19 has further exacerbated staffing challenges in long term care homes and hospitals across the province,” the statement read. “As a result, over the holidays hospital sites administering the vaccines requested to operate on slightly amended schedules, recognizing the challenges that the holidays can have on staffing levels in hospitals and long-term care homes.”

The Ontario Hospital Association did not respond to requests for clarification about whether any hospitals had in fact requested a slow-down of vaccinations over the holidays.

In an interview with CTV News Channel, retired General Rick Hillier, who chairs the COVID-19 Vaccine Distribution Task Force, said the decision to pause inoculations over the holidays was made in an effort to give front-line workers a break.

Hillier said he felt that it would be wrong to call health-care workers into vaccination centres during those two days.

“We shouldn’t (have) made that decision. I take responsibility for that. And clearly, we got it wrong. We’ve been slammed, we’ve been spanked, we’ll pick up our game,” he said.

“And so, what we do is we accelerate our program going forward here. We’ll get more people through those vaccination sites. We’re not going to be taking any more days off, and so we’ll catch up for those next couple of days."

In an interview with CP24 Monday, NDP Leader Andrea Horwath called the news that vaccine distribution was scaled back over the holidays “troubling” and “frustrating.”

“This is a situation that is literally one that could save lives if we were ramping up that vaccine distribution instead of ramping it down,” Horwath said. “Other provinces managed to do that. But we have this huge problem with the government not being forthcoming in terms of its plan, so we don't know whether this was planned all along, or whether it wasn't because they're simply not providing the transparency that they should be providing.”

In a statement, Liberal Leader Steven Del Duca said there should be no delays.

“The vaccine is the light at the end of the tunnel, we can’t afford to delay its rollout by nearly a week. With so many doses on hand and so few administered, there’s no excuse for the delay,” he said.

“Putting the blame on us or on hospitals, first of all, doesn't make sense. Hospitals run 24-7, including during the holidays,” Cohen said. “This is a health crisis, unlike any other that the province has experienced in recent memory.”

She said many health care workers would have “gladly stepped up to the plate” and volunteered their time if need be to keep vaccinations rolling.

Ontario Medical Association President Dr. Samantha Hill told CP24 that the OMA was not consulted about the modified vaccination schedule and agreed that doctors would have volunteered to keep vaccinations going.

“It’s heartbreaking. We’ve been waiting a year for the vaccine and to find out that there are days when it’s just not being administered, it’s hard to swallow,” she said.

According to the Ministry of Health, the province’s vaccination rollout “is well underway” and doses are not being held back to make sure that a needed second dose is available for those who have received a first.

“Upon receiving an additional 90,000 doses of the Pfizer vaccine from the federal government on December 21, we have continued to administer initial doses to thousands of Ontarians. We are not holding or reserving doses, and are vaccinating as many people as possible, counting on confirmed shipments of the vaccine that will arrive over the coming weeks for second doses,” the statement read.

“We have supported the provinces in their preparation for vaccine distribution by providing freezers, needles, syringes, alcohol swabs, bandages, and gauze strips at no cost,” Hajdu’s office said. “We continue to work closely with provinces and territories on their vaccine distribution plans to get doses to Canadians as quickly as possible, starting with those most at risk. We expect provinces will increase their vaccination rate as quickly as possible.”

As part of the province’s three-phase distribution plan, the first doses of the vaccine are being distributed to health care workers and essential caregivers in hospitals, long-term care homes, retirement homes and other congregate settings where seniors are cared for.

Phase 2, which is expected to begin later in the winter, will expand the list to include seniors in more congregate settings and adults over 70 in expanded regions.

“We anticipate getting through the 90,000 doses at our 19 active hospital sites in the next several days as we await future shipments from the federal government,” the Ministry of Health said in its statement.

In a news release Monday, the province said that Hillier will provide an update on the vaccine rollout Tuesday morning.

Ontario did not report COVID-19 numbers Monday. However the province has been consistently logging in excess of 2,000 daily cases recently.

Even without new numbers from Ontario, Canada marked a grim milestone Monday, surpassing 15,000 deaths since the start of the pandemic.

Francesca Paceri, a registered pharmacist technician carefully fills the Pfizer-BioNTech COVID-19 mRNA vaccine at a vaccine clinic during the COVID-19 pandemic in Toronto on Tuesday, December 15, 2020. THE CANADIAN PRESS/Nathan Denette