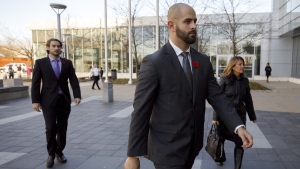 TORONTO - An Ontario judge made errors in assessing issues related to self-defence and unlawful arrest in the case of an off-duty Toronto police officer convicted of assaulting a young man, prosecutors argued before Ontario's top court on Thursday.

The Crown is appealing Michael Theriault's acquittal on charges of aggravated assault and obstruction of justice in the December 2016 beating of Dafonte Miller.

Theriault was instead convicted of the lesser charge of assault in connection with the incident, which left Miller, who was 19 at the time, with a ruptured eye and other injuries.

Theriault's brother, Christian Theriault, was also charged but was cleared on all counts -- a ruling the Crown is also challenging.

In her submissions, Crown attorney Susan Reid said the trial judge erred in his analysis of the early portion of the confrontation, during which the brothers chased Miller between two homes and Michael Theriault body-checked him against a fence.

While Ontario Superior Court Justice Joseph Di Luca acknowledged Miller would not have known his pursuers were seeking to arrest him, the judge mistakenly focused only on Michael Theriault's intentions in determining whether that series of events amounted to a reasonable use of force and a lawful attempt at arrest, Reid argued.

Since Michael Theriault did not identify himself as a police officer or verbally indicate he was trying to arrest Miller at the time, the attempt at arrest and the body check were not reasonable, she told the appeal panel, noting there were other options available.

“The lack of notice to Dafonte Miller is clear... and that alone would make the arrest unlawful,” she argued.

Di Luca further found that the body check may have led Miller to try to defend himself with a pipe, which means a proper assessment of the evidence was critical to the case, she said.

The error then affected the judge's assessment of the brothers' argument that they were acting in self-defence, she said.

Lawyers representing Michael Theriault are also challenging the verdict. They argued Wednesday the assault conviction was unreasonable based on the evidence, and Theriault's nine-month jail sentence is outside the normal range.

The Crown is only seeking a new trial if Theriault's conviction appeal is successful. If the conviction is upheld, prosecutors say it would not be in the public interest to try the case again.

During trial, prosecutors alleged the Theriault brothers attacked Miller out of a desire for retribution after finding him and his friends breaking into their family truck in the early hours of Dec. 28, 2016.

The Crown argued the pair beat Miller with a metal pipe during the confrontation.

Lawyers for the defence, however, alleged Miller was the one wielding the pipe, arguing their clients were acting in self-defence.

Di Luca found he couldn't rule out the possibility that self-defence played a role in the early portion of the incident. It was during that portion of the encounter that Miller sustained the eye injury that warranted the aggravated assault charge, he said in his verdict.

The judge rejected the self-defence argument for the later portions of the incident, when he found Michael Theriault armed himself with a pipe and hit Miller in the head as the wounded and unarmed young man retreated.

As a result, Theriault was acquitted of aggravated assault but convicted of the lesser charge of assault.

Miller, who denied he was stealing from cars that night, told the court during sentencing that the incident permanently altered his life and his view of law enforcement.

The young man, who is Black, said it was his first time experiencing such an abuse of power at the hands of police.