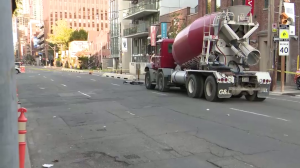 A cyclist was struck by a cement truck in the area of Adelaide Street West and Portland Street.

A cyclist has been seriously injured after being struck by a cement truck in downtown Toronto on Saturday night.

It happened in the area of Adelaide Street West and Portland Street before 8 p.m.

Police and paramedics arrived to find a male cyclist with a leg injury.

He was taken to the hospital with serious but non-life-threatening injuries.

Images from the scene show the front part of the bicycle separated from the rest of its body, lying on the road a few metres away.

The truck remained at the scene.