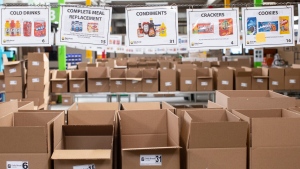 Boxes wait to be filled with provisions at The Daily Bread Food Bank warehouse in Toronto on Wednesday March 18, 2020. THE CANADIAN PRESS/Chris Young

One of the city’s largest food banks has had to cancel all of its planned holiday food drive events due to the COVID-19 pandemic and is now placing its hopes in the generosity of Torontonians as it embarks on the momentous challenge of trying to collect 400,000 pounds of food through individual donations alone.

The Daily Bread Food Bank had planned to hold a drive-thru, contactless food drive at its Etobicoke warehouse this month following the success of a similar event in the lead up to Thanksgiving.

But the surging number of COVID-19 infections in Toronto has now forced the food bank to cancel that event, along with its annual holiday food sort.

That means that if the Daily Bread Food Bank is to reach its goal of collecting 400,000 pounds of food this month, it will have to do so strictly on the basis of individual financial contributions as well as food drop-offs to grocery stores and fire stations.

“This might mean not enough food coming into Daily Bread but we just did not feel comfortable with even being perceived as drawing individuals together for an event,” Daily Bread CEO Neil Heatherington said during a press conference on Tuesday morning. “So we made a difficult decision and our hope is that in announcing that today individuals will continue to support the food raising efforts but do it in as safe a manner as possible and that is to do it individually and have the food sent here or to make an online donation.”

Heatherington said that visits to Daily Bread food banks have increased 51 per cent this year, likely due to the financial and unemployment crisis that has resulted from the COVID-19 pandemic.

He said that the food bank has tried to keep up with the surge in demand as much as possible and will deliver 1.1 million pounds of food to families in need in the next four weeks alone.

The problem, he said, is that half of the donations to the food bank usually arrive in December and with the loss of its annual holiday drive events there is a risk that the amount collected could be less this year when it is needed the most.

“We have right now seen a 51 per cent increase (in demand) and we are not seeing the trend line flatten out at all. So we are very concerned,” he said. “If you look back to the 2008 recession the highest amount of food bank usage actually came two years after that difficult fall. So if past is prologue then we are deeply concerned about the long haul here.”

Heatherington said that there were 104,000 visits to Daily Bread food banks in September, which is more than ever before.