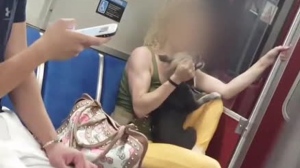 TORONTO -- Authorities in Toronto have seized a dog that police say was seen in an online video being hit by its owner while on a subway train.

The Ontario Society for the Prevention of Cruelty to Animals took the dog after executing a search warrant on Monday, OSPCA spokeswoman Alison Cross said Tuesday, noting that charges are pending in the case.

"This is a concerning video that we wanted to have an opportunity to investigate," Cross said.

Police said they were called to St. George Station in downtown Toronto for a report of a dog being abused.

Const. Allyson Douglas-Cook said officers interviewed a woman and witnesses and ultimately issued her a warning, releasing her with the dog.

"We couldn't do anything because the dog appeared to be unhurt and we didn't have access to any video of the incident at the time," Douglas-Cook said.

A video appearing to show the incident surfaced later that day, Douglas-Cook said.

In the video, which has been viewed more than a million times on YouTube, a woman appears to hit, pull and bite a small dog sitting on her lap on a subway train.

"You hear me? Stop it, stop it right now," the woman yells at the dog, which is on a leash and is seen trying to move away several times.

"You've got to stop hitting your dog," a man is seen saying to the woman when the train is stopped and its emergency alarm is going off.

"Stop what? Pardon?" the woman says to the man before hurling expletives.

Roxy Huang, who said she shot the video and posted it online, said she watched the incident unfold as she sat on the subway train.

"I was terrified and worried she might punch me in the face if she noticed I was recording her," Huang said in an email. "I have heard too many stories about abused animals, I know it is important to have evidence, that is why I started to record her."

Huang said she left the train as its emergency alarm went off and didn't immediately see any police, so she uploaded the video to YouTube.

Police said they grew concerned for the dog after watching the video and notified the OSPCA, which opened an investigation.

The OSPCA said the dog, a Chinese crested dog, has seen a veterinarian and is doing well.