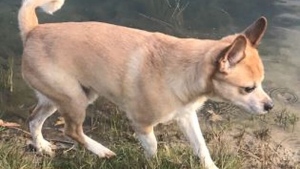 Police say a dog that was stolen outside a downtown dollar store on Wednesday morning has now been reunited with its owners after the pet was located in Scarborough.

According to the dog’s owner Monica Furman, her 12-year-old Chihuahua mix Spencer was tied up outside the Dollarama near Dundas Street West and Dovercourt Road at around 10 a.m.

She said she went inside to shop with her daughter for about five or 10 minutes and when she came back outside, the dog was gone.

"I don't know what the motivation was behind taking him. We just want him back,” she told CP24 on Wednesday.

A photo of the suspect who police believe took the dog was released a short time later and on Thursday morning, police confirmed that the dog had been found in Scarborough.

The exact location in Scarborough was not disclosed.

Police say a suspect, identified as 39-year-old William Locke, of Toronto, has been arrested and charged with theft under $5,000. He is scheduled to appear in court at Old City Hall today.

The dog, police say, has been reunited with his owner.