'Don't let this happen to anyone else': families seek change to border rules 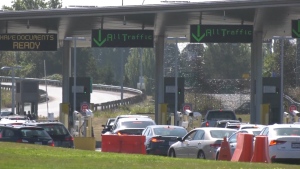 OTTAWA - “Please don't let this happen to anyone else.”

That's what John McCall has to say after COVID-19 restrictions on who can come to Canada meant his children were unable to be with their mother when she died last week near Peterborough, Ont.

The federal government announced Friday that Canada and the U.S. agreed to keep the border closed for another month. Despite increased pressure from families like McCall's and others, Ottawa has yet to loosen the limits on who is allowed to enter the country.

Immigration Minister Marco Mendicino said in an interview he knows that many people are in heartbreaking situations and he sympathizes with them.

He said he is reflecting on whether more exemptions need to be made as the government seeks to meet its twin objectives of commitment to family reunification and protecting public health.

“The measures that we've put in place at the border are helping to reduce the spread of the virus and that is saving lives,” he said.

“We have to balance both of these important objectives and commitments and we will do that.”

McCall had been trying for months to get his adult children up from the U.S. to care for their ailing mother Donna.

Urgent requests to the Immigration Department for some kind of exemption to the existing rules went unanswered.

So, the McCalls decided to do what they said, in retrospect, they should have done many years ago - apply for Canadian citizenship for the kids.

Donna was Canadian, John is American, though his family has roots in the area they now call home.

While immigration officials did eventually put a rush on Canadian citizenship papers for the two children, the documents didn't make it time: Donna died last Monday.

John McCall said he knows his isn't the only case where border restrictions are keeping families apart in life-or-death situations.

“My only goal now is to say, please don't let this happen to anyone else,” he said, dissolving into tears.

Their son Ian, 33, said that before COVID-19, his family had gone back and forth across the border with ease, and while they'd talked about getting their citizenship, it just didn't seem urgent.

He said he's not angry the restrictions are in place, but wishes officers had shown more leniency while there was still time.

Saying goodbye to your mother over video chat isn't something anyone should have to go through, he said.

“There are no words to describe how hard it is,” he said.

When the border initially closed back in March, there were very limited exceptions to who was allowed in, beyond Canadian citizens and permanent residents.

Those restrictions were eased in June to allow for some relatives to enter, a move Mendicino pointed to in the interview as proof of the government's commitment to family reunification.

Adult children of citizens, like the McCalls, were not on the list. Mendicino did not explain why when asked on Friday.

Others caught in limbo include people whose common-law relationships don't meet the definition of those that is set out in immigration law.

Many affected people have banded together into an advocacy group that held a press conference on Parliament Hill last Wednesday demanding change.

They've also tabled a petition in the House of Commons with over 5,300 signatures.

“We ask that a timetable and plan be developed to safely reunite our families, said David Poon, a Regina doctor whose partner is stuck in Ireland.

“The NHL was allowed a quarantine plan to keep themselves and their families safe - where is the one for Canadian families?”

This report by The Canadian Press was first published Aug. 15, 2020.