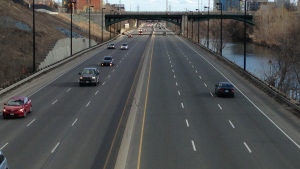 The Don Valley Parkway is closed for maintenance today after the closure was pushed back on Friday.

The annual closure was set to begin at midnight Friday and remain in place until 5 a.m. on Monday but in a news release issued on Friday morning, the city said that it would be pushed back until midnight on Saturday due to some rain in the forecast for earlier in the day that could interfere with road resurfacing work.

The change had the added benefit of giving fans headed to the Scotiabank Arena or Jurassic Park for Game 6 of the NBA Eastern Conference finals another way to get downtown.

“It looks like we will have constant rain starting at about 8 a.m. Saturday and continuing until about 3 p.m. on Saturday, so that would not work well for our paving crews, our line marking crews and our catch basin cleaning crews, so we had to cancel it but it does work out well for Raptors fans,” Toronto's superintendent of road operations Mark Mills told CP24 on Friday morning. “I think weather played a bigger role than anything but it did work out OK because now all the Raptors fans and Blue Jays fans can get down to those games on Saturday. That said keep in mind that we will be closing the highway at 12 a.m., so if you are celebrating a Game 6 victory make sure you get on the highway before midnight.”

The city says that while there will not be sufficient time to undertake the planned road resurfacing work on Sunday, staff will “explore alternate dates over the summer” when it could be completed with “limited impact to the travelling public.”

The activities that will be conducted during this closure include controlled chipping on 13 bridges, pothole repairs, graffiti removal, the replacement of guiderails at nine locations, debris removal, overhead sign maintenance and the cleaning of bridge joints and catch basins.