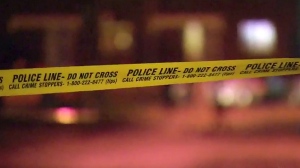 A man injured in a double stabbing in Oshawa early this morning was rushed to hospital in life-threatening condition.

Durham Regional Police say two males in their early 20s were stabbed following an altercation near a coffee shop in the area of Wilson Road and King Street at around 4:30 a.m.

One of the victims, who sustained a stab wound to the chest, was taken to a trauma centre for treatment in critical condition.

The other victim suffered several minor stab wound to his torso and was transported to a local hospital in serious condition.

One suspect is in custody but police have not said if any charges have been laid.