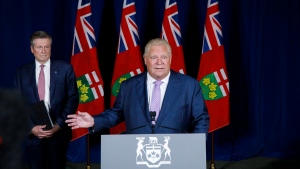 The premier made the public appearance following a closed-door meeting with Toronto Mayor John Tory at Queen’s Park, who also answered questions asked by reporters in attendance.

Here’s what the premier was asked about and how he responded:

Much of the more than half-hour media availability focused on housing, an issue that was highlighted earlier in the day following the release of a report which found rent prices in Toronto have risen by 20 per cent over the last year.

“We are going to have a very, very aggressive plan moving forward,” Ford said, pointing to the vacant property available to the provincial and federal governments.

“So that’s the first part, to make sure that we focus on building on that vacant property, every piece of property available. We should at least look at and investigated it and make sure it’s feasible to build on.”

Housing was a focal point of Ford’s successful re-election campaign, in which he pledged to build 1.5 million homes in 10 years.

Provincial ministers tasked with finding affordable housing for Ontario’s growing population include Steve Clark, who remains as municipal affairs and housing minister, and well Michael Parsa, who takes on the job as associate minister of housing.

Meanwhile, Infrastructure Minister Kinga Surma takes on the additional mandate for government real estate, and will be responsible for finding land on which to build housing.

For the mayor’s part, he said that inter-governmental cooperation is key to getting homes built.

“We can’t afford to have a city in which only people who are comfortable or those who are struggling can live (here). There needs to be room for people in the middle.”

Housing legislation that the government passed shortly before the election contained measures to streamline approval processes, but lacked key measures such as zoning changes that advocates and experts have long urged, which Clark blamed on a lack of co-operation from municipalities. 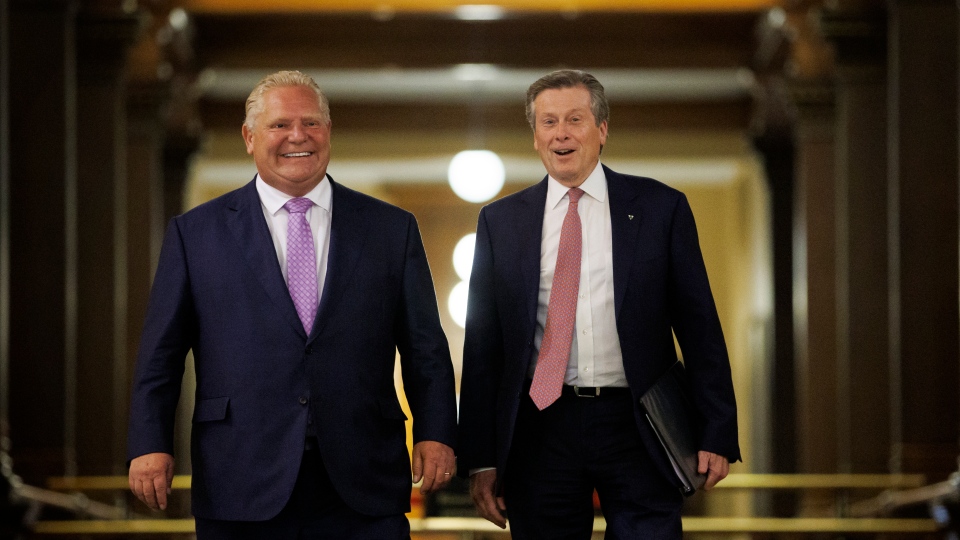 APPOINTING HIS NEPHEW AS MULTICULTRALISM MINISTER

From housing, the premier was asked about the his decision to appoint Michael Ford -- his nephew -- to the position of Minister of Citizenship and Multiculturalism.

Michael Ford, who previously served as a Toronto councillor since 2016, won the riding of York South—Weston on the June 2 election, a win, the premier seemed to suggest, justified the appointment.

“Michael has extensive experience. He’s been elected democratically four times now. Two years as a school trustee, eight years as a city councillor, and then, he just won a seat in York South—Weston that we haven’t won in 71 years,” Ford said.

And while Michael Ford doesn’t have any experience in Queen’s Park, the premier said he has “a lot of knowledge” on the multiculturalism file and that growing up in Etobicoke has given him direct exposure to “one of the most multicultural areas in the entire province.”

Amid a rash of gun crime in the city, the premier was asked about how best to keep Toronto safe, in which he referred to his long-held belief that beefing up sentences for offenders would help solve the problem.

“When we catch these people that are committing heinous crimes with guns and shooting up neighbourhoods, we need to have tough prison terms for them. We can’t have these people that commit these crimes out on the streets in two or three days. It’s unacceptable,” Ford said.

According to police data, Toronto has seen 201 shootings in 2022 so far -- an increase of more than 15 per cent versus this time last year. 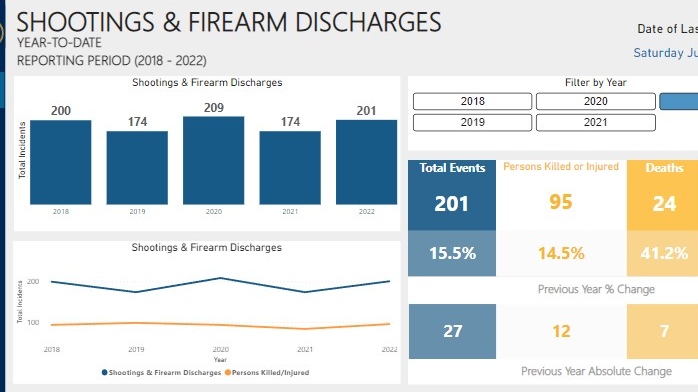 At the same time, fatal shootings are up by 41 per cent with 24 deaths reported in the last six months.

Moreover, Ford repeated his call to Ottawa to provide more support to border officers where, he says, most firearms are coming from.

“90 per cent of these guns are coming across the border from the U.S. So we have to give the supports to our frontline men and women that protect our borders,” Ford said.

2025 DEADLINE FOR AN ACCESSIBLE ONTARIO

Legislation requires that the province be fully accessible by 2025, a deadline Ford says his government must “accelerate” to meet.

Ford expressed his confidence in Minister Raymond Cho, who has served as Minister of Seniors and Accessibility since 2018, and said he and his government will “make sure” the 2025 timeline is met.

ON A PROMISED 5 PER CENT ODSP INCREASE

Ford was also asked about a campaign promise he made in early May, in which his government pledged to increase financial supports for the Ontario Disability Support Program (ODSP) by five per cent if elected.

He said that making the increase a reality is one of his government’s “number one priorities” but that doing so is dependent on passing the budget.

“When we go back into the House, we’ll make sure that moves as quickly as possible. When that happens, they’ll get their five per cent increase.”

Ford said last week there would be a summer session in the near future, where politicians will head back to Queen’s Park and allow him to reintroduce and pass his 2022 budget – which served as his election campaign platform.

As for when the session will start, Ford said it would happen “very shortly.”

“If you just bear with me for a week, we just want to sit down and have our first cabinet meeting, first caucus meeting. But it’s going to be very, very soon that we’re going to call the house back,” Ford said.

On the heels of news that a new Omicron subvariant is expected to become the dominant COVID-19 strain in Ontario, Ford was asked about what his government is doing now to prevent any possible surges in hospital occupancy in the fall.

The premier, whose first-term was largely dominated by the COVID-19 crisis of 2020, said that staffing up human resources is key to planning for the future and that he and his government have “learned from lessons in the past.”

“The biggest problem right now is we need people. If someone could snap their fingers or wave their magical wand and give that 10,000 extra nurses we’d do it immediately. Are we recognizing the credentials of thousands of nurses from around the world? We’re doing that as well.”