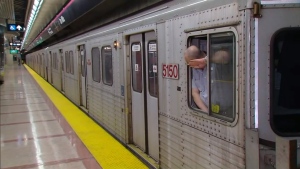 A Toronto city councillor is speaking out against a proposed TTC fare hike that would see riders paying an additional $0.10 on most fares starting in March.

The fare hike was included in this year’s budget, the TTC says, to help pay for service improvements, capital projects, and the hiring of 142 new full-time employees.

“The cost of TTC in the city of Toronto has just continued to escalate to a point that it is getting unaffordable for many,” University-Rosedale Coun. Mike Layton told CP24 on Saturday.

The adult single cash fare would remain at $3.25.

“The pass that we developed for low-income Torontonians, people on ODSP, on Ontario Works, people who need help paying for transit, we are actually increasing their transit fares this year, as we did last year,” Layton said.

“We will see a total of a seven per cent increase over the course of the first two years of having this low-income pass.”

Layton noted that the proposed service improvements are important for ridership growth and for the city’s own climate targets.

“I don’t think the TTC board had any other choice… The problem is they don’t have any other sources of income so they can’t do this any other way,” he said.

“Well the city does and we should look at other ways of funding better service in the city of Toronto and not always expect to go back to the TTC rider and have them fund the improvements.”

He added that the other levels of government should also be responsible for paying a share of the TTC’s operating costs.

In a written statement released Friday, Mayor John Tory said over the past five years, the city has increased its funding to the TTC by 44.4 per cent, which represents approximately $243 million.

“I support continuing and improving service further in 2020, not cutting it back despite what will again be a tough budget year, and notwithstanding the City’s significantly increased support, all of these initiatives necessitate a fare increase,” Tory wrote.

He added that he also supports the proposed hiring of an additional 50 transit enforcement officers for “revenue control” to ensure riders are paying their fares.

“It is totally unacceptable for people to ride the TTC without paying their fare- it is theft- and reports of fare evasion this year have been outrageous and infuriating,” Tory said.

The extra enforcement officers will cost the TTC $3.2 million but the transit agency believes the fines will result in an additional $7 million in revenue.