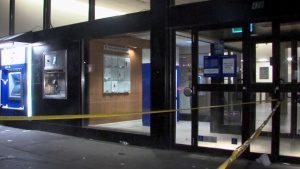 The scene of a stabbing near College and Bathurst on May 19, 2019 is seen.

A 32-year-old man was taken from the scene of a downtown stabbing to hospital overnight Sunday.

At around 3 a.m., emergency crews were called to the area of College and Bathurst streets for reports of an altercation involving three people.

When they arrived at the scene, officers said they located a male victim suffering from multiple stab wounds. He was subsequently taken to hospital with non-life-threatening injuries.

Investigators have described a suspect wanted in connection with the incident as a five-foot-five black male in his 20s with gold teeth and corn rows. He was last seen wearing a red varsity jacket.

Roads were blocked off in the area but they have since reopened.

The scene of a stabbing near College and Bathurst on May 19, 2019 is seen.