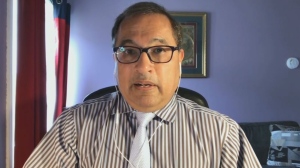 Dr. Karim Kurji is seen in this undated photo.

The doctor announced that he is retiring on Sept. 30 at a special meeting of the York Region Council on Thursday.

“On behalf of York Regional Council, I want to thank Dr. Kurji for his professionalism, dedication and commitment to supporting the health and well-being of the more than 1.2 million residents who call York Region home,” York Region Chairman and Chief Executive Officer Wayne Emmerson said in a statement.

“With almost four decades of public service, there are so many accomplishments to highlight. However, for York Region, Dr. Kurji’s legacy will be his instrumental role in our ongoing fight against COVID-19.”

Kurji has faced criticism for his comments about the COVID-19 pandemic, most recently during the third wave.

His opposition to the closure of businesses has often put him at odds with his counterparts in other GTA public health units, who have largely called for a more cautious approach in dealing with COVID-19.

In March, when many public health experts warned about a third wave driven by variants of concern and called for a lockdown to avoid explosive case growth, Kurji dismissed those claims, calling them exaggerated.

While he noted that the variants were concerning, Kurji said his region would manage any surge in cases through good case and contact management.

His predictions were wrong. Weeks following his comments, York Region saw a fivefold increase in its rolling seven-day average (from 111 to 500) in April, with the growth in cases largely caused by variants.

An online petition was also created calling for his termination over his refusal to order the closure of schools as the third wave hit the province. It garnered thousands of signatures.

Despite calls for his firing, York Region Council expressed their confidence and continued support of Kurji’s leadership.

York Region said Kurji initially planned to retire in early 2020 but due to the COVID-19 pandemic, it was postponed so that he can lead the region’s response.

“COVID-19 is a public health crisis like one we have never experienced, but with the support of York Regional Council, we have been able to continuously respond to the ever-changing needs of our community,” Kurji said in a statement.

“I have also been enormously blessed to have the privilege of working with such talented York Region staff over the past 16 years. Whilst I am considered the ‘face’ of the York Region COVID-19 response, there continues to be many, many staff working tirelessly to keep our communities safe, both during and after this pandemic ends.”

Kurji joined York Region Public Health in 2005 as Associate Medical Officer of Health before getting appointed to the top position shortly. Prior to that, he also held senior positions with the Ontario Ministry of Health and served as the province’s chief medical officer of health for one month in 2004.

“Dr. Kurji plans to spend more time with his family and grandchildren, as well as resume some hobbies sidelined during the pandemic,” the statement read.

York Region said the search for Kurji’s replacement is underway.

- with files from Chris Fox