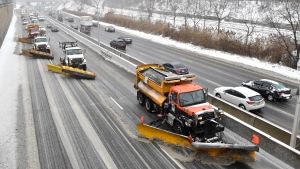 A line of snow plows clears the Gardiner Expressway in Toronto on Tuesday, Feb.12, 2019. THE CANADIAN PRESS/Frank Gunn

Residents returning to work after the Family Day long weekend could face a messy commute on Tuesday morning.

Environment Canada has issued a winter weather travel advisory ahead of a system that could dump four to eight centimetres of snow on the city by early Tuesday morning.

The weather agency says that the snow will begin falling at around midnight and will eventually change over to rain or drizzle as a warm front moves in later on Tuesday morning.

There is also a possibility for brief periods of freezing rain overnight.

“Poor winter driving conditions from accumulating snow and low visibility in briefly heavier snow are likely overnight into early Tuesday morning,” the advisory states. “The first half of the morning commute may be affected. Motorists should allow extra time to reach their destination.”

The temperature will dip to a low of – 3 C overnight before rising to an unseasonably warm 6 C on Tuesday.

A line of snow plows clears the Gardiner Expressway in Toronto on Tuesday, Feb.12, 2019. THE CANADIAN PRESS/Frank Gunn