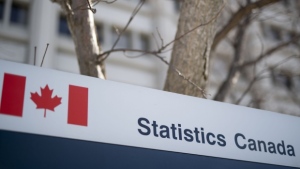 Statistics Canada's offices in Ottawa are shown on Friday, March 8, 2019. Statistics Canada says manufacturing sales fell 9.2 per cent to $50.8 billion in March as factories shut down due to the COVID-19 pandemic or faced sharply lower demand. THE CANADIAN PRESS/Justin Tang

OTTAWA - Nearly one million more Canadians had jobs in June than a month earlier, Statistics Canada says, as businesses forced to close by the pandemic began to reopen and the country continued to recoup the steep losses over March and April.

Statistics Canada's labour force survey released Friday showed 953,000 jobs were added last month, including 488,000 full-time and 465,000 part-time positions. The unemployment rate fell to 12.3 per cent after hitting a record-high of 13.7 per cent in May.

Statistics Canada said the unemployment rate would have been 16.3 per cent had it included in unemployment counts those who wanted to work, but did not look for a job.

Job gains were made in every province, including by 378,000 in Ontario, marking the first increase since the COVID-19 shutdown, Statistics Canada said. It didn't include any gains in Toronto as restrictions in that city loosened after the survey week.

Despite the good news, economist Jim Stanford said there remains a historic crisis in the job market with high unemployment and hundreds of thousands who have left the labour force altogether.

Also, gains nationally were not shared equally among groups, with women, youth and low-wage workers still slower to rebound, which Stanford said could be problematic if those jobs don't ever come back.

“I worry about a coming second round of layoffs motivated not by health restrictions, but by companies deciding their businesses are going to be permanently smaller. So that would be qualitatively different and in a way worse,” said Stanford, director of the Centre for Future Work in Vancouver.

“We aren't remotely out of the woods yet, but this was a really encouraging step forward.”

Some three million jobs were lost over March and April due to the pandemic, and 2.5 million more had their hours and earnings slashed. By last month, some 3.1 million were affected by the pandemic, including 1.4 million who weren't at work due to COVID-19.

Brendon Bernard, an economist at Indeed Canada, said recapturing jobs at the same pace in the coming months will be tougher.

“A lot of areas of the economy still aren't running at full capacity,” Bernard said. “So while doors may be open and customers might be coming in, business hasn't come back to normal.”

Despite the overall improvement, the oil and gas industry continues to struggle.

The PetroLMI Division of Energy Safety Canada says direct oil and gas employment fell by more than 6,700 positions in June compared with May, with about 70 per cent of the net job losses in Alberta.

Compared with a year earlier, employment in the oil and employment sector was down 17 per cent.

The overall job losses were unprecedented in speed and depth compared with previous recessions, Statistics Canada said, and the rebound to date sharper than previous downturns.

Ottawa's response has been equally unprecedented: a deficit of at least $343.2 billion this fiscal year as the Trudeau Liberals dole out some $230 billion in emergency aid.

In June, 28.3 per cent of Canadians aged 15 to 69 reported receiving some form of federal aid since mid-March, Statistics Canada said. Meanwhile, the proportion of households reporting difficulty paying the bills dropped to 20.1 per cent in June from 22.5 per cent in May.

“Without the federal government being there to support Canadian workers, Canadian businesses and the Canadian provinces and territories, we would be in a bigger mess in this country right now,” Hassan Yussuff, president of the Canadian Labour Congress said in an interview this week.

The Bank of Canada and federal government believe the worst of the economic pain from the pandemic is behind the country, but Canada will face high unemployment and low growth until 2021.

In a statement, federal Employment Minister Carla Qualtrough touted the overall jobs numbers as a sign the government's plan was working, before adding many Canadians still “face real challenges during this time.”

She and other ministers are now reshaping programs so fewer workers stay on the $80-billion emergency benefit, and more get tied to jobs through the $82-billion wage subsidy program.

She said there are other issues to resolve around health and safety in the workplace, transit, and child care to help more Canadians get back to work.

In provinces where daycares reopened for children five and under, employment levels returned to pre-pandemic levels for fathers in June, but not for mothers. Similarly, mothers with children under 18 were more likely than fathers to work less than half their usual hours in June, Statistics Canada said.

Job gains have come at a faster clip for men. Their unemployment rate hit 12.1 per cent in June compared to 12.7 per cent for women. And the underutilization rate - which counts those who are unemployed, those who want a job but didn't look for one, and those working less than half their usual hours - was 28.3 for women and 25.5 per cent for men.

Economist Armine Yalnizyan said the numbers underscore the need to provide child care as well as options for schooling in the fall so mothers can work.

The alternative, she said, could pull back any economic gains.

“It means that even if there are jobs, some women won't be able to take them because there's no way they can leave their kids,” said Yalnizyan, a fellow on the future of workers at the Atkinson Foundation.

“So we are looking at the potential for an economic depression instead of talking about paces of recovery and pivoting to building to better.”