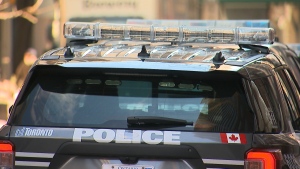 A pedestrian has been seriously injured after being struck by the driver of a vehicle in downtown Toronto on Friday afternoon.

Toronto police say the collision happened in the area of Bay Street and Gerrard Street West shortly before 2:30 p.m.

When officers arrived, they found the pedestrian, an elderly woman, bleeding from the head.

She was subsequently taken to a trauma centre with serious but non-life-threatening injuries.

Police say the driver remained at the scene.

Gerrard Street West is closed from Yonge Street to Bay Street due to the collision.