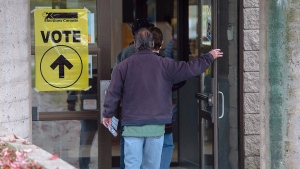 In a preliminary report to Parliament about the Oct. 21 election, Perrault says there was no cyber disruption to services to Canadians or to the administration of the electoral process.

Elections Canada created a social-media monitoring unit devoted to scouring online platforms for disinformation about how, when and where to cast ballots and rooting out websites and social-media accounts that falsely claimed to belong to the independent elections agency.

The report says Elections Canada flagged to social-media companies 28 instances of impersonation or inaccurate information that could have interfered with electors' ability to vote, although none were “concerning in terms of their scope.”

Thirteen of those posts were removed by the platforms; some of the accounts were determined to be inactive.

“Thankfully, nothing happened but it doesn't mean that we have to stop being concerned about these issues,” Perrault said in an interview shortly after the report was tabled in the House of Commons.

“These are now, I think, permanent features (of elections).”

Elections Canada worked with Canada's security agencies to secure its operations and Perrault said it will continue to do so now that the election is over. It will also maintain the social media-monitoring unit, on a reduced scale, and continue to require cybersecurity training for all employees.

The report says some 18.3 million Canadians cast ballots, or 67 per cent of registered voters, down slightly from the 68 per cent turnout in 2015, which was a 20-year high.

It also says Canadians are increasingly choosing to vote in advance polls rather than wait until election day.

There was also an increase in the small percentage who chose to vote by special ballot.

While nearly 70 per cent still chose the traditional approach of waiting to cast their ballots at their local polling stations on election day, the report says that is “the lowest percentage ever recorded in Canadian federal elections and attests to the rise of the popularity of advance voting.”

Elections Canada officials said the extended hours and additional locations for the advance polls was a big factor behind the increased cost of the 2019 election - an estimated $504 million, up from $443 million for the 2015 campaign, which was almost twice as long.

“We need to find a way to meet the demands of electors, increase the service options, without increasing the workforce because there just is no more people to hire.”

The report says returning officers aimed to recruit 248,000 election workers but ended up hiring about 232,000, most of whom where assigned to polling stations. Roughly 10,000 of them did not show up for work.

Canadians living abroad were allowed to vote in the election, regardless of how long they'd been outside the country - a change introduced by the Trudeau government and which some Conservatives had argued would pave the way for two million or more expats to vote, some of whom might potentially be compelled to vote a certain way by unfriendly foreign governments.

In the end, the report says just 34,144 expats actually voted - almost precisely the number Perrault had estimated would take advantage of the reform.

Elections Canada received some 11,100 complaints during the campaign, down from 17,000 in 2015. More than half came from environmental groups worried that talking about climate change would constitute a political activity for which they'd have to register as a third party.

Perrault said the problem was “a bit of a wildfire” but confined largely to the pre-election period. Once Elections Canada clarified the rules, he said, it died down.