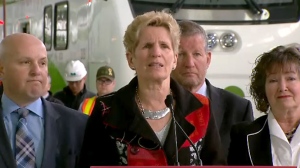 Elections Ontario says it is investigating a complaint made by the Ontario PC party, arguing that Liberal leader Kathleen Wynne is using taxpayer-supported government announcements to “make political statements to attack her political opponents.”

In one such announcement on April 18 concerning increased hospital funding, Wynne took time to read from a prepared letter to denounce Doug Ford after he suggested “there would be a few more Liberals joining David Livingston in jail” if “Kathleen Wynne tried to pull these kinds of shady tricks in private life.”

Klees said the party complained to Elections Ontario on April 16 and heard back on Friday that the agency was looking into the claim.

Elections Ontario spokesperson Cara Des Granges says the agency does not comment on complaints it receives, “or whether or not it is investigating a matter.”

But the PCs released a letter Sunday that suggests the agency is investigating.

“We have advised the Ontario Liberal Party of the details of your complaint, in accordance with our complaints investigation and enforcement policy. We will contact you if we require any further information and will advise you of the result of our investigation,” a letter sent to the Ontario PC Party’s lawyer from Elections Ontario CAO Deborah Danis read.

In response, Ontario Liberal Party Executive Director David Clarke said the complaint was an example of “The Conservatives are attempting to exaggerate the significance of Elections Ontario's obligatory reply to their letter of complaint.”

“Of course, it must investigate any claim no matter how absurd and groundless.”

He suggested the Liberals would be making a complaint of their own to Elections Ontario in the near future.

“By way of comparison, we will soon be sharing evidence with Elections Ontario of genuine misconduct on the part of the Conservatives and look forward to that investigation.”

Clarke did not disclose the nature of the Liberals’ concerns with the PCs.