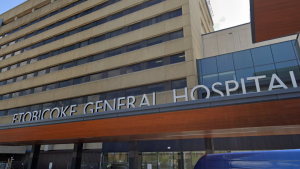 An employee at Etobicoke General Hospital has died after contracting COVID-19, a spokesperson for the Canadian Union of Public Employees (CUPE) confirmed Thursday.

Few details have been provided about the deceased, who the union says was a member.

The employee’s name has not yet been released.

The worker was a patient at a Toronto hospital when they died, CUPE added, but it is unclear exactly when they passed away.