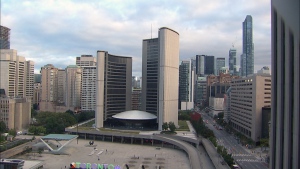 If you are headed to city hall to pay a bill or take care of any other sort of business you should prepare yourself for tighter security.

Starting tomorrow, all visitors to Toronto City Hall will have to walk through a metal detector upon entering the main doors of the building.

Visitors will also have to allow security guards to inspect their bags or backpacks for prohibited items.

The enhanced security measures were initially recommended in two separate assessments that were completed by Toronto police in 2017 and had been the subject of extensive public consultation since then.

In December 2018, the city did begin requiring that all visitors to the council chamber during council meetings go through metal detectors but the additional security wasn’t extended to the rest of the building until a vote on Jan. 29.

In a staff report at the time, the city’s Executive Director of Corporate Real Estate Management Patrick Matozzo pointed out that the enhanced security measures were in line with what is seen “at provincial legislatures, city halls at large cities in the United States, courts, and sport and entertainment venues.”

“The safety of all those who work, visit, or do business at city facilities is a top priority of the City of Toronto. These proposed security enhancements will help maintain an accessible, safe, and secure city hall for staff and the public,” Matozzo said. “These enhancements will also provide the majority of all building occupants with the same level of security currently employed in the council chamber, thus providing uniform security protections for all persons.”

The previous security rules, in place since August 2018, only required that visitors submit to baggage screening to access higher floors of the building and not the main rotunda.The city says that about 126,000 bags have been inspected since that measure went into effect.