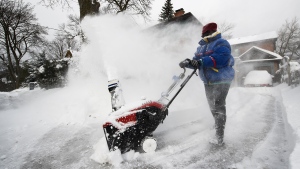 Environment Canada has issued a snowfall warning for much of southern Ontario. (The Canadian Press)

Environment Canada issued the warning just before 2 p.m. on Tuesday.

“We’ll have higher intensity snowfall rates through the afternoon. So the afternoon commute is very much going to be impacted with visibility reductions throughout the rest of the evening tomorrow as well,” he told CP24 on Tuesday.

Snowfall totals of 15 to 20 centimetres are forecast between Wednesday and Thursday, the weather agency said.

Flisfeder advised those who have travel plans to give yourself extra time to get to your destination and when on roadways to leave a safe stopping distance between vehicles.

The storm is being caused by a Texas low tracking north towards Ontario, Environment Canada said.

Flisfeder said because the snowfall is occurring with temperatures around the freezing mark it's expected to be heavy and could cause some damage.

“Snow loads on tree limbs that have been weakened through the winter already, there’s that potential for some of those tree limbs to fall on power lines and cause local outages,” he said.

By Thursday morning, the snow is expected to taper off. So far in January 2023, about 11 centimetres of snow has fallen in Toronto, well short of the monthly average of 30 centimetres.

Environment Canada has issued a snowfall warning for much of southern Ontario. (The Canadian Press)