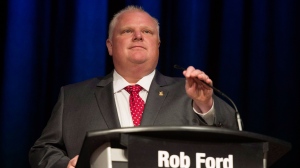 Mayor Rob Ford is pictured in Toronto on July 15, 2014. (The Canadian Press/Darren Calabrese)

Etobicoke residents won’t soon be seeing Rob Ford’s name on any of their new street signs.

This past summer, the city released a survey asking the public to decide what to call three new streets being constructed as part of the transformation of the Six Points Interchange in Etobicoke.

A list of 10 potential names were floated, including Ford, veteran Blue Jays’ announcer Jerry Howarth, and Darwyn Cooke, an award-winning comic and graphic artist who grew up in Etobicoke.

Shortly after choices were released, the Ford family requested that the late mayor’s name be removed from the list.

The number of eligible responses totalled more than 25,000 and ultimately ‘Adobigok Pathway,’ ‘Biindagen Trail,’ and ‘Jerry Howarth Drive’ were selected.

Councillor Michael Ford, nephew of the late former mayor, said the family felt naming a roadway would not be a "fitting commemoration" of his time in office.

"The Ford family is humbled by this gesture and thanks everyone involved in putting Rob’s name forward for consideration, however, at this time, they do not believe it is a fitting commemoration of the late Mayor," he said Wednesday. "The family will continue to look for ways to honour Rob’s commitment and dedication to the people he so lovingly served."

Ford, who served as the city councillor for Etobicoke North for three terms and was the city’s 64th mayor from 2010 to 2014, died in March 2016 at the age of 46 after he was diagnosed with cancer.

This is not the first time the city has been asked to consider naming a part of Toronto after the controversial politician.

In 2017, the city voted against renaming the stadium at Centennial Park after Ford.

The recommended street names are up for approval at Etobicoke York Community Council next month.