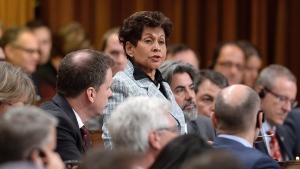 Liberal MP Yasmin Ratansi delivers a speech prior to the vote for the election of a new Speaker to preside over the House of Commons on Parliament Hill in Ottawa on Thursday, Dec. 3, 2015. THE CANADIAN PRESS/Sean Kilpatrick

Dion says Ratansi could have done more to avoid the conflict but believes it was an error in judgment that she took steps to fix as soon as someone told her of the issue last fall.

As such, Dion says he won't be recommending any penalties.

The House of Commons committee governing MPs spending has however already ordered Ratansi to repay more than $9,000 paid to her sister because it found she violated House of Commons rules against hiring immediate family members, including siblings.

Ratansi, the MP for the Toronto riding of Don Valley East, now sits as an Independent after leaving the Liberal caucus last fall when her sister's employment came to light.

Ratansi says in a statement that she accepts Dion's report that it was an error of judgment “made in good faith.”

“My hope is that this report brings this matter to a close,” Ratansi said. “The report now allows me to turn the page and my pledge is to continue to represent the residents of Don Valley East to the best of my ability and to ensure their voices are heard in Ottawa.”

Ratansi hired Zeenat Khatri to work in her constituency office on immigration files in 2006, when members' rules did not specifically say siblings could not be hired.

Ratansi lost her seat in the 2011 election, and Khatri's job ended. But Ratansi was re-elected in 2015, and Khatri resumed her employment in January 2017.

Dion's report says Ratansi claims she did not know the members' rules had been changed in 2012 to now also bar MPs from hiring siblings but he says had she properly consulted the rules she would have figured it out.

Ratansi also claims that Khatri is not her legal sister, but was a foster child taken in by her family in the 1950s when they lived in Tanzania. As such she says there is no violation of the rules.

However Dion points out that Ratansi had long referred to Khatri as her sister, and when the concerns were raised in November 2020, Ratansi apologized, acknowledged she had made an error in judgment, and immediately ended Khatri's employment.

“A reasonable person looking at the matter with an understanding of the applicable rules and relying on the information above could only conclude that Ms. Khatri's employment was contrary to (the bylaw),” he wrote.

The conflict of interest code itself does not designate a sibling as a family member, but the members' bylaws do. So Dion says his conclusion is that by hiring Khatri, Ratansi did improperly further the interests of a family member.