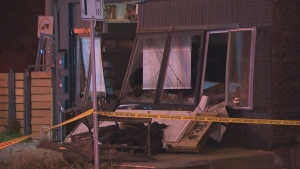 Windows were blown out following an explosion in East York.

Police say that they now believe an explosion at an East York house last week was caused by two tenants “who were using chemicals to make illicit drugs.”

The explosion occurred at a home in the area of Woodbine and Lumsden avenues shortly after 5 p.m. on Nov. 27, briefly resulting in a fire in the basement.

Images from the scene also showed the doors and windows of the building had been blown out by the force of the blast.

Meanwhile, some other residents in the home also sustained minor injuries and were treated by paramedics at the scene.

One suspect, identified as 38-year-old Johnathan Nicholson, was arrested earlier this week. He was initially charged with two counts of arson causing bodily harm and one count of arson disregard for life but is now facing six additional charges, including altering cannabis with an organic solvent.

Police also say that they are “actively looking” for a second suspect identified as 30-year-old Cassandra Nicholson.

She is wanted on the same nine charges that Johnathan Nicholson is facing.

She is described as five-foot-six, 160 lbs., with blue eyes and red hair. Police say that she may be driving a grey 2007 GMC Envoy SUV, with Ontario license plate CMJS655.

“If her or the vehicle are seen, please call 911 immediately,” police said in a news release issued on Friday afternoon