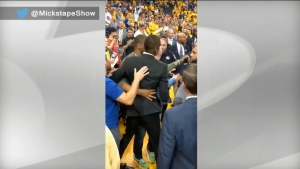 A Raptors fan who witnessed the alleged altercation between a cop and Masai Ujiri inside Oracle Arena on Thursday night is speaking out about what transpired.

The Alameda County Sheriff's Office has alleged that Ujiri shoved an officer who was trying to prevent him from accessing the court in the moments after his team clinched an NBA title.

A fan who attended the game and was seated close to the altercation, however, told CP24 on Saturday that he believes the officer started the altercation by using “excessive force.”

“He (the officer) might have been doing his job because at that moment in time with all the pandemonium it might have been hard to distinguish who he (Ujiri) was. But at the end of the day it is Masai, I don’t think he needed to use excessive force,” Raskal Montana said. “The way he was dealing with him, it was disrespectful, it was rude.”

A spokesperson for the Alameda County Sheriff's Office previously said that Ujiri did not have the proper credentials to be on the court for the victory celebrations and therefore was denied access by the officer.

The spokesperson said that Ujiri then pushed the officer out of the way, prompting the officer to push him back.

Montana’s account is a little different, though. He said that he saw the officer put his hands on Ujiri first.

“He didn’t let him through, Masai took offence and after that he sort of brushed Masai to prevent him from getting through. Masai then kind of did a ‘What are you doing?’ kind of thing and then he (the officer) got aggressive with Masai,” he said. “Masai got upset and kind of nudged him back.”

Video of the aftermath of the incident that was recorded by Montana shows an unidentified party separating the officer from Ujiri. Raptors point guard Kyle Lowry is then seen entering the picture, grabbing Ujiri’s hand and pulling him onto the court.

The Alameda County Sheriff's Office has said that they will request that a misdemeanor battery charge be laid in connection with the incident, though that decision would ultimately rest with prosecutors.

In a statement provided to CP24 on Friday, a spokesperson for the Raptors said that the organization is “cooperating with authorities” in regards to the incident and are looking forward to “resolving the situation.”

With files from Cristina Tenaglia