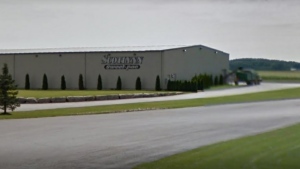 The Scotlynn Farms facility near Vittoria, Ontario in Norfolk County is shown in a Google Streetview image.

TORONTO -- The number of COVID-19 cases at a farm in southwestern Ontario has nearly doubled in a matter of days, local authorities said Tuesday, as the province's chief coroner's office said it would investigate the death of a migrant worker from the virus.

The Haldimand-Norfolk Health Unit said 164 people - most of them migrant workers - have tested positive for COVID-19 at the Scotlynn Group's farm in Norfolk County, up from 85 cases reported on Sunday.

“As part of the public health management plan, health unit staff are continuing to contact individuals who have been in close contact with (workers) for further evaluation,” a statement from the health unit said.

In all, 210 people at the farm have been tested for the virus, with 46 testing negative. The agency said seven people have been admitted to hospital but gave no update on their condition.

But with large congregate living situations on most farms - and few local hotel accommodations in the area - it's been a major challenge to isolate workers, she said.

“People wonder how could an outbreak of this magnitude have happened?” Chopp said. “Well, it could have been building for quite some time when you have that number of asymptomatic people living in a setting like that.”

Chopp called on both the federal and provincial governments to provide more resources to municipalities to help them protect workers and the food supply chain.

“We're providing food security to the country, and our health unit, and our local taxpayers are incurring huge costs right now,” she said.

Also on Tuesday, the office of Ontario's chief coroner confirmed it is investigating the death from COVID-19 of a 30-year-old migrant worker in Windsor.

Spokeswoman Stephanie Rea said the investigation is on-going and she could not provide further details about the circumstances of the man's death.

Windsor-Essex medical officer of health Dr. Wajid Ahmed said Monday that the man came to Canada in February and tested positive for the virus on May 21.

He was self-isolating in a local hotel when he died on Saturday.

“My team and I are truly sorry for the death of this young, temporary foreign worker,” Ahmed said. “I've said it before many times - every life lost is a tragic loss to our community.”

Approximately 20,000 migrant workers come to Ontario each year to work on farms and in greenhouses, many of them from Mexico, Guatemala and the Caribbean. When they arrived this year, they were required to self-isolate for 14 days.

Outbreaks that have affected dozens of migrant workers have been reported in Chatham-Kent, Windsor-Essex, Niagara Region and Elgin County.

Meanwhile, Ontario's New Democrats called on the Tory government Tuesday to help the province's agricultural community deal with the pandemic.

“In the agricultural sector, that must include mobile testing units, local motel or hotel facilities for isolation, personal protective equipment, and ensured access to clean water and sanitation.”

Ford said Monday he wanted to ramp up testing for agricultural workers and that he would have more news on that effort in the coming days.

He also said the province may have to consider making changes to the communal nature of the bunkhouses in the future, but it would be hard to take that action during the pandemic.

“It's something we can put on the table,” he said. “Can we do it in within a month or so? I just don't think that's reality. But what we can do, we can go in and test frequently. I think it's critical that we do.”