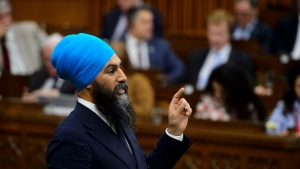 NDP Leader Jagmeet Singh stands during question period in the House of Commons on Parliament Hill in Ottawa on Wednesday, June 12, 2019. The federal New Democrats have been looking for a boost and they're hoping to get that on Sunday, when leader Singh presents the party's policy vision for the upcoming election campaign. THE CANADIAN PRESS/Sean Kilpatrick

HAMILTON - The federal NDP says if it is elected this fall it will expand Canada's health-care system, starting with fast-tracking a universal drug plan to ensure a late 2020 start date.

NDP Leader Jagmeet Singh says if his party forms government after the October federal election, it will inject $10 billion annually into a national pharmacare program.

The NDP proposal would see the pharmacare program start sooner than an expert panel recently recommended.

The panel said a national list of prescription drugs for pharmacare should be established by Jan. 1, 2022, and be expanded no later than Jan. 1, 2027.

The NDP policy comes in a new "commitments document" -- dubbed A New Deal for People -- unveiled today at the Ontario NDP convention in Hamilton.

In remarks provided to the media in advance of his convention speech Sunday morning, Singh says the plan would save families who already have insurance coverage $550 a year.