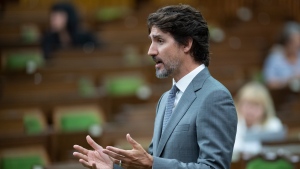 Prime Minister Justin Trudeau rises in the House of Commons Wednesday July 8, 2020 in Ottawa. A Quebec man who was charged last December in connection with alleged online threats against Trudeau and the Muslim community is now being charged with advocating genocide.THE CANADIAN PRESS/Adrian Wyld

OTTAWA - Federal opposition parties are demanding to know why the Liberal government created a $900-million program to help students find volunteer positions rather than putting the money into an existing summer jobs program.

The government says the new Canada Student Services Grant is intended to reward tens of thousands of students who are having a hard time finding work and want to help with the COVID-19 pandemic.

Opposition parties say the Liberals could have accomplished the same task by putting the money into the existing Canada Summer Jobs program, through which thousands of jobs for students are subsidized by the federal government every year.

The opposition says doing so would have avoided the numerous problems that have plagued the volunteer program, including the fact participants will receive less than minimum wage for each hour worked.

It would also have avoided the conflict-of-interest allegations that are now swirling around Prime Minister Justin Trudeau and other members of his government after WE Charity was selected to administer the volunteer program before eventually backing out.

The Green Party this morning called for the government to immediately shift the money earmarked for the volunteer program to the summer-jobs program to help students who need work.