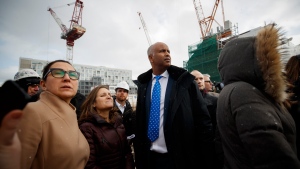 Ahmed Hussen, Canada's Minister of Families, Children and Social Development looks on with Deputy Prime Minister Chrystia Freeland during a tour of a construction site that will soon house residential housing in Toronto, Thursday, Jan. 16, 2020. THE CANADIAN PRESS/Cole Burston

The federal government says that it will finance the construction of hundreds of new affordable housing units as part of a mixed-use development currently being built on the former site of the Honest Ed’s department store.

Minister of Families, Children and Social Development Ahmed Hussen made the announcement on Thursday afternoon, calling it an “amazing project” that will “provide more affordable housing for people living and working in the downtown core.”

Under the plan, developers Westbank Corp. and Peterson Group will receive $200 million in financing through the Canada Mortgage and Housing Corporation’s rental construction financing initiative (RCFI).

As a condition of the financing the developers have agreed to ensure that 366 of the 916 units they are delivering will have rents at or below 30 per cent of the city’s median income, including 100 units that will be classified as “deeply affordable” with rents capped at 80 per cent of the average market rate.

Officials say that a one-bedroom “deeply affordable” unit will cost about $1,000 a month while the affordable units will be a little more expensive but still below market rate.

The Mirvish Village project represents one of the largest purpose-built rental developments to be undertaken in the city in recent memory.

There are also plans for a public market, an outdoor performance venue, a daycare, a new public park, and micro-retail incubator spaces created in collaboration with the Centre for Social Innovation.

Speaking with reporters, Hussen conceded that the rents in the projects may still be expensive for some but he cautioned against “looking at the project in isolation.”